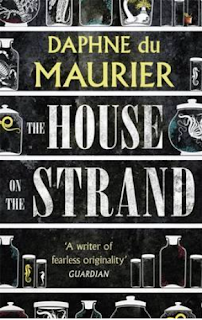 For this year's RIP Challenge, I had intended to reread either Daphne du Maurier's Rebecca (one of my all-time favorite novels) or My Cousin Rachel, which was recently adapted into a movie. I may yet read both of these, but I also discovered that The House on the Strand was available from my library's digital catalog as an audiobook -- so I've crossed one of her lesser-known novels off my to-read list! House on the Strand is the fifth of du Maurier's novels that I've read, and I absolutely loved it -- it's a close second to Rebecca and I don't think it gets nearly the attention it deserves.

Here's the setup: published in 1969, this is the story of a forty-something man named Dick Young, told as a first person narrative. Dick recently left a high-pressure publishing job in London and is spending the summer holidays in Cornwall at a house called Kilmarth, the home of his oldest friend, Magnus Lane, a noted professor of biophysics. Dick's wife Vita and two stepsons are due to join him in a week or so, but before they arrive, Magnus asks Dick to do him a favor -- Magnus is trying to create a drug that will actually allow the user to travel back in time -- not physically, but through memory -- and he wants Dick to be his guinea pig.

Magnus explains that somehow, memories are biologically passed down, and by taking the drug, the user can somehow access memories that are centuries old, as if they've actually traveled into the past and are experiencing it in real time. The user is just an observer, and can't be seen or heard by the people in the past; also, if the user makes physical contact with anyone, they will be instantly returned back to the present, with very uncomfortable side effects.

Dick takes the plunge and goes back in time to the 1300s, observing a man named Roger Kylmerth who lived in the original property. Roger was the steward of a Cornish aristocrat, Sir Henry Champernoune, and Dick is immersed in the intrigues between Henry's manipulative widow Joanna and the beautiful Isolda, wife of another aristocrat, who is carrying on an affair with Joanna's brother. Roger is secretly in love with Isolde, and is something of a doppleganger for Dick, who becomes obsessed with Isolda and the drama surrounding her life. Dick becomes more and more obsessed with Isolda and the long-dead players in this Middle Ages drama, to the detriment of his life in the present.

I really, really enjoyed this book, though I did find the parts set in the past a bit confusing -- it was harder on audio because I couldn't flip back to earlier sections to reread and clarify who was who (apparently the print version has family trees and a map, which would have been extremely helpful). Luckily, I'd gotten used to some of the Cornish names after reading so many of the Poldark novels -- names like Bodrugon and Trenwyth are pretty familiar now, and listening on audio, I've learned how they're actually pronounced.

Overall, though, the parts of the book that were most fascinating were how Dick reconciles his new obsession with the people in the present, particularly his wife who shows up unexpectedly early. He has to make up excuses as to why he disappears for hours at a time, and returns confused and dirty after wandering around the countryside in a trancelike state while under the influence of the drug as he follows Roger, Isolda, and the rest of the historical Cornish characters. It becomes increasingly apparent to the reader that Dick is putting himself in grave danger, both from the drug itself, and in physical danger since he has no concept of the present while he's traveling into the past -- it's hard to look both ways crossing the street when you think you're in the Middle Ages, when cars didn't exist.

This book is a really interesting psychological study -- is this really happening to Dick, or is he just hallucinating?  Is it all just the drugs, or is Dick subconsciously working through his personal issues in the present? I got really invested in the story, and became really worried about what was going to happen to everyone, in both narratives. I found this a really interesting twist on how time travel works and the physical and mental effects on the traveler.

The only thing I really didn't like was the characterization of the women in this book, none of whom come off as sympathetic except the luminous Isolde, who doesn't seem especially developed. For a female writer, du Maurier has a lot of terrible women in her books. However, I still loved it and it's definitely one of my top reads of the year.
Posted by Karen K. at 3:23 PM 14 comments: