The Matador of the Five Towns by Arnold Bennett 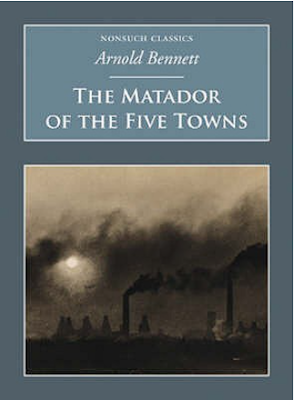 Years ago while living in Texas I was at the Half-Price Books in San Antonio whereupon I found this bought this adorably wee little volume of short stories (6.5 x 5 inches/17 x 12.5 cm) by Arnold Bennett. I had just completed and loved his novel The Old Wives Tale so why not? Well, at least ten years and three moves later I finally gotten around to finishing it. One would think that a small volume of 22 short stories shouldn't take that long, but you know how it is.

If you haven't read Arnold Bennett, he seems to me a sort of transitional writer between the 19th and 20th centuries. This volume is copyrighted 1912, but many of the stories had a more Victorian feeling. Most of his stories are about working-class and middle-class people, just slices of life set in his fictional Five Towns which are modeled on the six Pottery towns in the Staffordshire area of Northern England.

Once started, it still took me awhile to get into this book -- it's divided up between "Tragic" and "Frolic" with the majority in the latter category. The first stories is the eponymous "Matador of the Five Towns" and it's also the longest, which is probably why it seemed to take forever to get into. But once I started I found that I really enjoyed them, mostly the lighter comic "Frolic" stories. I won't go into each story into detail but just a few highlights:

"Catching the Train" -- a man and his brother are repeatedly thwarted on a train journey to a Very Important Destination which isn't revealed until the end. It's one of those trips where anything that can possibly go wrong, does so in the worst possible way.

"The Blue Suit" -- a woman slyly manipulates her nephew's wardrobe choices while on a seaside holiday in Wales, with unexpected results.

"Hot Potatoes" -- the mother of a violin prodigy desperately tries to keep her son's hands warm for a concert on a cold day.

"The Long-Lost Uncle" -- a young man has an opportunity for romance after the sudden departure of his miserly uncle.

"Why the Clock Stopped" -- a pair of aging siblings have secrets from one another.

I definitely preferred the lighter comic stories to the tragic (though they weren't so terribly tragic) and I found that many of them had delightful twist endings. They reminded me a bit of the short stories of Edith Wharton, a bit like O. Henry, and even a little like Trollope, so if you like any of these authors, you might enjoy exploring Arnold Bennett. This volume is also available on iBooks and on Project Gutenberg, as are most of Bennett's early works. To be honest, I actually ended up reading most of it on Gutenberg via my laptop because as cute as this volume was, the print was really tiny! (Plus I have become used to reading while I eat my lunch and it's so much easier while reading on a screen).

Overally I did enjoy this book and will definitely read more Arnold Bennett, I have a vintage copies of both Hilda Lessways and Buried Alive and would love to read both or either of them this year.

This is my second book for the Back to the Classics Challenge, also counting this as my UK read for the European Reading Challenge.