Something Fresh by P. G. Wodehouse: Silliness at Blandings Castle 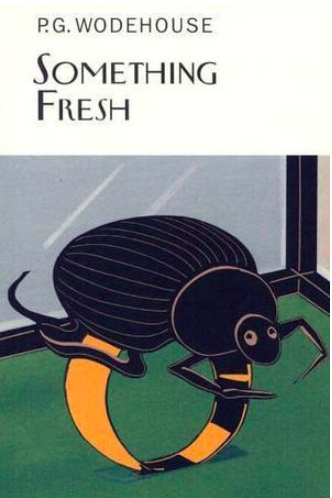 After my visit to Second Story Books in Rockville last month, I realized that nearly all the unread P. G. Wodehouse in my home library were from his Blandings Castle series. I get twitchy about reading books in a series out of order (except for Zola), so I decided to track down the first novel, Something Fresh, first published in 1915 (titled Something New in the U.S.) It was available for digital audio download from my library, and since I was about to embark on a long car trip, it seemed like the perfect choice for a summer read. This book doesn't count for a single one of my reading challenges but it was a break from all the long books I'm reading this summer, and it is so delightful I had to write about it.
The story begins with a young man called Ashe Marson, a young writer of thrillers who is lodging in a cheap rental near Leicester Square in London (though I am sure it would shockingly expensive today). He has drawn the attention of a fellow lodger, Joan Valentine, because he is outside one morning doing calisthenics in the street. They get to talking and it is revealed that Joan is also a writer for the same cheap tabloid, and they both want to get out and do something more interesting (and profitable).
Meanwhile, we are introduced to the hapless Freddie Threepwood, the second son of Lord Emsworth of Blandings Castle. Freddie is in a tizzy because he has recently become engaged to a young heiress, Aline Peters, daughter of an American businessman. His father is pleased with the engagement, but Freddie is worried that he may be served with a breach-of-promise lawsuit from a pretty chorus girl. Freddie never actually met her but sent her flowers, letters, and poetry, which may have included a proposal. He fears that he may be subject to blackmail or even legal action.
Then we have Lord Emsworth, a gruff yet lovable but extremely forgetful man, who is liable to steal the silverware from a restaurant as most people would walk off with a cheap ballpoint pen. Whilst visiting his future in-law Mr. Peters, the absent-minded Lord has unwittingly absconded with a valuable Egyptian artifact, a precious Cheops scarab, from Mr. Peters' collection. Mr. Peters will stop at nothing to get it back, including a large reward, and places an ad in the paper for a young man seeking a well-paid adventure, which attracts the attention of Ashe. 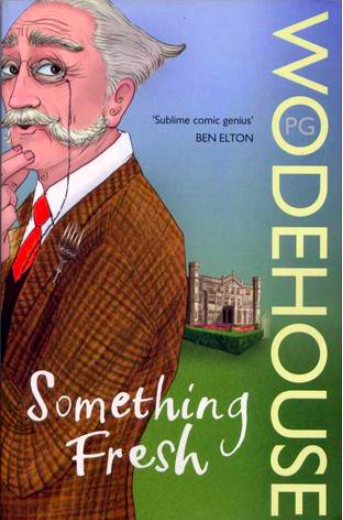 All these characters converge on Blandings Castle for a fortnight's holiday in which everyone is trying to get their hands on the scarab, with the addition of various relatives, hangers-on, secretaries, and servants, and hilarity ensues (and even a little romance). If you're familiar with the Jeeves and Wooster stories, this is definitely in the same vein, especially the classic novel The Code of the Woosters (which also involves an artifact being stolen back). There is even a brief mention of an Emsworth relative named Algernon Wooster -- a precursor of Bertie, perhaps?
This was the perfect book for a car trip, and I found myself laughing out loud multiple times. It was brilliantly narrated by Frederick Davidson, who does all the voices and accents beautifully (except for a few slips in his attempts at an American southern twang). Davidson also narrated the audio version of Les Miserables that I downloaded earlier this year, and his reading was a big part of keeping my interest for the 56 parts of the novel. He was a prolific narrator of more than 700 audiobooks and I think I could listen to him read a telephone book, if they still exist.
I'm looking forward to more Blandings novels and maybe even the TV series, which I have yet to watch. Has anyone seen it? And which Wodehouse novels do you recommend? I've read several of the Jeeves and Wooster novels and some of the stand-alone novels. Next up in the Blandings series is Leave it to Psmith, which is #4 in that series, so I don't know if I should go back and start with Psmith #1 and jump back into Blandings. Does it really matter?
Posted by Karen K. at 2:27 PM 12 comments:

The Eighth Life by Nino Haratischvilli 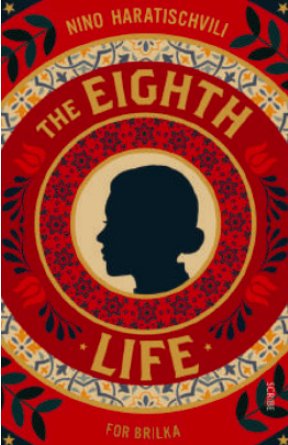 I first heard about The Eighth Life a few months ago, but I knew immediately that I wanted to read it. More than nine hundred pages about a family in Eastern Europe, over six generations? More than a hundred years of a family's history? A book in translation? Yes please, this is exactly the sort of book I love. But I'm not going to lie, this book, as you might expect, is A LOT.
I should back up a bit and give as much summary as possible. The story begins with a prologue: Nizia, Stasia's great granddaughter, is living in Berlin and gets a frantic phone call from her mother. Nizia's niece Brilka, aged 12, has left her ballet group in Amsterdam and is on a train to Vienna, alone, on some kind of wild-goose chase. Nizia agrees to find her niece and bring her back to Tbilsi. The story then goes back more than a hundred years, to tell the history of six generations of the Jashi family, beginning with Stasia, a young Georgian dancer who is forced to give up her dreams of the Bolshoi Ballet and instead marries a dashing young officer in the early 20th century. Nizia narrates the story as though she's telling her family's history to Brilka.
She remains with her family as he goes off on assignment, then they are separated by the Russian revolution. We learn about Stasia's beautiful sister Christine, who living a fabulous life in Tbilisi society until she attracts the attention of an important party leader; about Stasia's two children: Kostya, a promising Russian naval officer; and Kitty, a talented folk singer; Kostya's spoiled daughter Elene, the mother of narrator Nizia; and Nizia's sister Daria, a beautiful actress. Along the way there are world wars, revolutions, sieges, torture, heartbreak, murder, and terrible things happen to everyone along the way. There is also a magical chocolate recipe that is supposed to be some kind of curse but is really only a very minor part of the book (and I was really hoping for a recipe that never appeared.)
Haratischvilli interweaves real events and people (named and unnamed) in the book, so I learned a bit about Georgian and Russian history and geography. I do admit to skimming over some of the politics mentioned in the book. These characters experience a lot of tragedy and heartache -- honestly, I'm shocked that everyone in Georgia doesn't have PTSD or worse. I cannot even imagine living through even a fraction of what these characters have experienced.
Overall, I really liked this book and being able to spend so much time with the characters. There are a lot of great strong women in this family (though they seem to have terrible taste in men). I did prefer the first half of the book to the second -- the narrator, Nizia, is actually my least favorite character in the book. She does some things that seem really unbelievable and overly convenient to the plot. However, I was so absorbed in the family's story and all the other characters that I stayed along with it until the end. I was not disappointed, though I was hoping for more chocolate.
The Eighth Life was first published in German in 2014, and finally translated into English in 2019. I love reading books in translation -- I know so many of my books are mid-century British and classics and I really want to expand a little bit. It is Women in Translation Month so this ties in nicely. It also ties in as my Georgian selection for the European Reading Challenge, and towards my Big Book Summer Challenge.
Posted by Karen K. at 1:11 PM 2 comments: 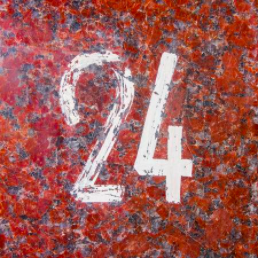 I only have 21 books left on my second Classics Club list! That made it pretty easy to make my list for the upcoming Classics Spin: to participate, you list 20 books from your Classics Club List, and on August 9, we'll be assigned a random number that will select the book for it. The book is to be read by September 30 -- two whole months! Plenty of time in case it's a big long book.
All but one are from my own shelves, so there's a good chance I'll knock off another of my owned-and-unread pile (ever growing, sigh). I've put them in order alphabetically by title this time to make things more interesting.

The only ones I'm dreading are Crime and Punishment (it sounds so dire) and La Debacle (a war novel), I'm really in the mood for lighter reads. Roughing It might also be a bit of a slog.

I've heard good things about Troy Chimneys and The World My Wilderness, and I've been meaning to read Jenny Wren what seems like forever! And how have I not read A Few Green Leaves by Barbara Pym? She's one of my favorite writers, and it's the only one of her novels I haven't read yet.
Bloggers, are you signing up for the next Classics Club Spin? What do you want to read most from your lists?
UPDATE: The Classics Spin has assigned us #18. So I'll be reading Troy Chimneys by Margaret Kennedy. I'm looking forward to it and who knows, maybe I'll try to read even more from my list in the next two months before I post on my spin pick on September 30.
Posted by Karen K. at 9:34 PM 18 comments: