"There came a moment, she imagined, in the lives of most unmarried daughters, and perhaps in other people's too, when they must either bolt or go permanently under."

It's funny how some authors are so strongly identified by a single work, when they often have lots of other books which are largely ignored. I feel like Elizabeth von Arnim is one of those authors.  She's so well know for her delightful novel Enchanted April, yet so many of her other books are hardly discussed and mostly out of print.

One of those novels is Father, published in 1931. It's sadly fallen out of print, like many of her novels (except in Italian -- most of her books seem to be in print int Italy -- because of Enchanted April ? Of course I'm only guessing.)

Anyway, I've now read nine of her books and Father is near the top of my rankings, by far one of my favorites. Set between the wars, it's the story of Jennifer Dodge, the thirty-three year old spinster daughter of a famous writer. On her mother's deathbed some 12 years before, Jennifer promises to look after her father. Inevitably, she give up her youth and possibilities of any of her own hopes and dreams, devoting herself to Father so that his work is not disturbed.


All this changes when Father comes home one day and announces that he has remarried -- to Netta, a nineteen-year-old beauty, a girl young enough to be his granddaughter. Naturally, Jennifer is stunned -- then elated! With a new wife, surely she will be in the way? Now she can escape and have a chance at her own life. Though her father never paid her a cent for her hard work, Jennifer has a tiny income of her from her late mother, and decides to find a tiny cottage where she can garden and live happily in the country.

Minnie, the cook, suggests her home county of Sussex, and Minnie's copy of the local church paper provides two possibilities. After has Father whisked Netta off on a Norwegian honeymoon, Jennifer gets on a train to explore two cottages owned by neighboring vicarages. The first attempt is a disaster, and at the second, the spinster sister of the vicar agrees to rent Rose Cottage to Jennifer, simply out of spite to her brother, with whom she's just had a tiff.


Alice Ollier, the vicar's sister, quickly regrets her decision when it occurs to her that is distinctly possible that her brother James might fall in love with Jennifer! There's almost a bit of screwball comedy involved as Jennifer begins to settle into Rose Cottage and Alice attempts to thwart her. What would happen to 40ish Alice if James brings home a bride? Meanwhile, Jennifer's idea of a peaceful existence is frustrated by the sudden appearance of the child bride Netta -- apparently there's trouble in paradise. Jennifer's father is also none too pleased at her decision to -- gasp -- want a life of her own! The nerve!

Parts of this are quite funny, but there's an undercurrent of sadness in this novel, as it's mostly centered on men's expectations of the women in their lives, and people trying to manipulate one another. The character of the father in particular made me want to jump into the book and throttle him -- I have rarely read such a well-drawn, frustrating character. He is absolutely self-centered and self-absorbed. And I wanted to give Alice a good talking-to as well.


I chose this book off my stack because I thought the title would make it a perfect fit for the Classic About a Family category in the Back to the Classics Challenge. It didn't turn out to be quite what I expected -- it is about families, but it's just as much as about the Olliers as it is the Dodges. I hope I'm not giving the impression that I didn't like this novel, because I really liked it, and it will probably be one of my top reads of the year.

I'm counting this as my Classic About a Family for the Back to the Classics Challenge.
Posted by Karen K. at 9:47 AM 15 comments:

Labels: Back to the Classics 2020, between the wars, domestic fiction, Elizabeth von Arnim, families

Two volumes done, three to go! I'm making real progress with Les Miserables, one of the books that's on my TBR shelves the longest. I've read 500 pages so far and completed two volumes.

The second volume of Les Miserables begins with an extended description of the Battle of Waterloo. Talk about back story -- this section goes on for nearly fifty pages and at the very end, in the last three pages, we finally discover how it relates to the rest of the book! The awful Thenardier, the innkeeper who takes custody of Cosette, arrives on the scene as a thief, scavenging from the bodies on the battlefield. Nice.

Then we jump back to what's happening with Jean Valjean, now serving a prison sentence on another galley ship -- but not for long! He manages to escape by faking his own death after saving a sailor's life. He then retrieves some money and makes his way back to the Thenardier's village so he can rescue little Cosette from those monsters who are treating her like a slave. The scene where they finally get away from Thenardier is one of the most satisfying I have read in a long time. 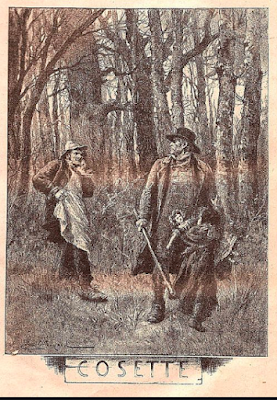 Jean Valjean and Cosette make their way to Paris, where they live quietly in seclusion for awhile, until Jean suspects he's being watched. They escape in a very exciting sequence, and wind up in a secluded walled garden which turns out to belong to a convent with a girl's school conveniently attached. In one of those amazing coincidences so beloved by Victorian writers, the elderly gardener is Fauchelevent, the very man whose life was saved by Jean Valjean back in Vol. I, which aroused Javert's suspicion to his true identity. Fauchelevent swears he will help Valjean with anything, and they arrange to smuggle Cosette out of the garden in a basket, so they can bring her back to the school through the front door.

However, the conundrum is how to sneak Valjean out of the garden and back inside semi-legitimately as Fauchelevent's brother and new assistant gardener. In another amazing coincidence, one of the nuns has just died and it is her dying wish to be buried (illegally) in the vault of the chapel. Conveniently, the convent now has an empty coffin which needs to be filled with something and buried to avoid suspicion. It was no surprise that the plan succeeds, with some suspenseful plot twists.

This volume had a lot of twists and turns, and great plot development. However, it also included with some very detailed and long asides about both the Battle of Waterloo and the convent where Cosette and Valjean end up. I ended up listening to much of this on audio so I didn't mind the history and asides, but I cheerfully admit that my mind wandered during the extended action scenes. I'm really enjoying this book, but boy, it could have used some editing.

And now for some photos of Paris!


Back when I lived in Germany, we were very lucky to be close to the border of France -- less than an hour's drive for an easy day trip, but even better, there was an express train to Paris from the nearest town. From my village train station, I could make it to Paris in less than four hours. If I booked far enough in advance sometimes it was as little as $80 for a round-trip ticket. Needless to say, I made the trip quite a few times.
On my second trip I decided to visit the home of Victor Hugo which is now a free museum, Maisons Victor Hugo (there's a second museum in Guernsey). It's in the Place des Vosges, a beautiful square in the 3rd Arrondissement, not far from the Place de la Bastille. Hugo lived at #6 Place Royal (now Place des Vosges) from 1832 to 1848. I hadn't read any of his works when I visited but the  museum is quite interesting. It includes a lot of his possessions from his entire life, including his writing desk and the bed in which he died, plus portraits of Hugo and some of his own drawing -- I hadn't realized he was also an accomplished artist.

It's definitely worth seeing if you're in Paris and if you're curious about writer's homes, as I am. I've been to several, including Jane Austen, Dickens, Hemingway, Ann Frank, and Goethe. I'd also love to go to Yorkshire and see the Bronte parsonage and the home of Elizabeth Gaskell. And now that I live on the East Coast I'm hoping to go up to the Berkshires and visit Edith Wharton's home.

Bloggers, do you enjoy visiting writer's homes? Which ones should I visit in the U.S.?
Posted by Karen K. at 12:21 PM 8 comments: