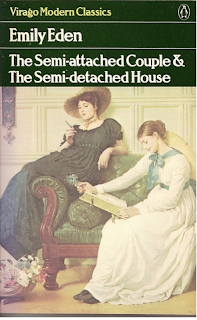 As a longtime fan of Jane Austen, I'm always sad that she only completed six major works. There are far, far too many books claiming to be the heir to Jane Austen.  Somewhere in my bookish searches, I found The Semi-Attached Couple and The Semi-Detached House by Emily Eden, a Victorian writer who is largely unread these days. These two novellas are out of print but available for free online or inexpensively as used paperbacks, and are one of the closest things I've come to next-generation Jane Austen.

My edition was published in one volume, and though the novels have similar names, they are unrelated. The Semi-Attached Couple concerns two neighboring families, the Douglases and the Eskdales. They had children about the same time, but as the children have grown, the families have grown apart, and Lady Eskdale, higher socially, has married her two daughters off before Mrs. Douglas, who is full of hilarious snide comments, much like Mrs. Bennet from Pride and Prejudice, only with a sharper tongue.

In the beginning of the novel, the youngest and most beautiful Eskdale daughter Helen is about to be married to Lord Teviot, who is considered quite a catch. Helen is young and her expectations of marriage are different than those of her husband, which creates friction in their new marriage. He's jealous of her affection for her family. One thing leads to another and the marriage appears doomed. There are also side plots about unmarried friends and family and who's going to end up with whom.

Also, soon after their honeymoon, her husband invites a large party to visit his estate, including the treacherous Lady Portmore. Here's an excerpt of a conversation between her and the newlywed Lord Teviot. Lady Portmore is trying to stir up trouble between Lord T and his bride:

Lady P:  “Is that Helen's new horse she is riding?"

[Lady P]:  "Well, I wonder Helen did not prefer your gift. I am sure that from sentiment I should never allow any human being but myself to ride a horse that had been given to me by the person I loved best in the world.

Lord T:   "That is an interesting and romantic idea; but as I shall probably have the honour of furnishing Lady Teviot's stud to the end of our days, it is not very likely that she will refuse to lend a horse to her friends when they come."

Lady P:  "Oh dear, no, that would be selfish; and you know how I hate selfishness. I often say there is nobody thinks so little of self as I do. Still I wonder Helen did not ride Selim."

Lady Portmore is everyone's best frenemy. She reminds me of a cross between Caroline Bingley from Pride and Prejudice and Mrs. Elton from Emma (with just a hint of Lady Catherine de Bourgh). There are a lot of similarities between these two novels and Jane Austen's works, and there's even a mention of P&P in a letter, from young Eliza Haywood asking permission from her mother to be allowed to read it. Clearly, Emily Eden was a fan of our Jane.

Naturally, all goes right in the end, with some good plot twists. I did wait a bit before reading the second novella, The Semi-Attached House, which I also enjoyed.  I was going to review both books in the same post but this has gotten longer than I expected so I'll save it for another day. These works don't have nearly the depth or the great writing as Jane Austen, but for plot, characters, and wit, they are just the thing if you are a Janeite or if you're looking for light Victorian read.
Posted by Karen K. at 6:03 AM 11 comments: