Kon-Tiki: Across the Pacific in a Raft by Thor Heyerdahl 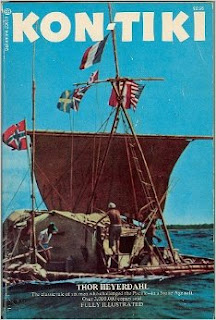 I always like to include at least one classic on my book group's potential reading list, and last year, the group voted to include Kon-Tiki: Across the Pacific in a Raft as one of our 2015 reads. I thought an adventure story would be a fun summer read, but as August got closer, I began to worry that no one would show up to the book discussion. How many people want to discuss a book that's been around forever but hardly anyone reads anymore?

Well, to my surprise and delight, I had a full house for the book group discussion -- seven people showed up! Nearly everyone had read the book except one member who watched the documentary. I myself put off reading the book off until a week before the discussion, and I was actually worried that I wouldn't finish it in time. Two days before the meeting, I still had 120 pages to go. However, the final three chapters were so riveting I read it all in one sitting.

But I'm getting ahead of myself. For those who don't know the story, Kon-Tiki is the true story of six men (five Norwegians and a Swede) who test author Heyerdahl's theory: that it's possible that hundreds, perhaps thousands of years ago, people from South America traveled across the Pacific Ocean as far as Polynesia, more than 4000 miles away. Heyerdahl first made the connection before WWII, while visiting French Polynesia, when he was struck by the likeness of the tiki god statues to South American carvings. After the war, he was in New York City and began planning the journey and found five men to accompany him on what sounds like an insane voyage in 1947. With private donations and some help from the American and Peruvian governments, Heyerdahl and the five other men built the raft from balsa wood had it towed out of the way of shipping lanes, and hoped for the best.

Over the next three months, the men sailed across the Pacific on the Humboldt current, facing storms, sharks, and whales, with nothing to steer the raft, and mostly basic equipment, though they did have a radio. Most people doubted they would ever reach their destination. I'm fascinated by the romance of sailing, but the thought of floating in the middle of the ocean, thousands of feet above the ocean floor scares me silly. And they did this willingly! But the story is really interesting, especially the encounters with marine life like whale sharks, and what they ate and what they saw every day.

I was surprised at what a fascinating, quick read this book was. I liked most of it though there was a part in the middle where Heyerdahl explains the history of Easter Island which I found a little dry and mostly skimmed. I also wish the book had gone into a little more detail about life on the boat -- how did everyone get along for 101 days, stuck on a boat in the middle of nowhere -- literally?

I did a little research afterward, and this book has sold more than 20 million copies and has been translated into many different languages.   My book group mostly liked it, though we did wonder why it was such a huge publishing phenomenon. My guess was that it really captured the public imagination -- it's a pretty amazing feat. It was also made into an award-winning documentary film, and in 2012, made into a fiction version of the film which was nominated for Best Foreign Language Film. I haven't seen either of the film versions yet but the library owns both so I hope to watch one or both of them soon.

Overall, an excellent read, and I'm counting it as my Non-fiction Classic for the Back to the Classics Challenge.
Posted by Karen K. at 9:51 PM 8 comments: 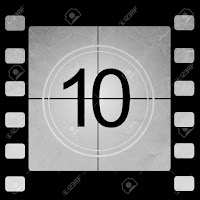 Nothing like a Classics Spin to get me out of a blogging slump -- I'm down to only sixteen books on my Classics Club list! This made signing up for the latest Classics Spin really easy. Next Monday, I'll be assigned a book from this list based on a random number assigned by the Classics Club. Here's my list:

1. The Mystery of Edwin Drood by Charles Dickens
2.  The Portrait of a Lady by Henry James
3. Armadale by Wilkie Collins
4. New Grub Street by George Gissing
5. Sylvia's Lovers by Elizabeth Gaskell
6. The Man in the Iron Mask by Alexandre Dumas
7. Main Street by Sinclair Lewis
8. The Four Feathers by A. E. W. Mason
9. No Name by Wilkie Collins
10. Lark Rise to Candleford by Flora Thompson
11. The Hunchback of Notre Dame by Victor Hugo
12. The Good Soldier by Ford Madox Ford
13. The Return of the Native by Thomas Hardy
14. One of Ours by Willa Cather
15. A Dance to the Music of Time (First Movement) by Anthony Powell
16. Lucky Jim by Kingsley Amis

And to make it an even 20, I'm repeating four books:

17. The Four Feathers by A. E. W. Mason
18. New Grub Street by George Gissing
19. The Return of the Native by Thomas Hardy
20. No Name by Wilkie Collins

I'm really hoping for Hardy, Collins, or maybe Anthony Powell. New Grub Street sounds interesting too. Which books should I be dreading? And is anyone else signing up for the next Classics Spin? What books are you hoping for?

Updated: My lucky spin number was 5, so I'll be reading Sylvia's Lovers by Elizabeth Gaskell! Very happy with my spin pick!
Posted by Karen K. at 12:30 PM 24 comments:

Welcome to Austen in August! Today I have the honor of a guest post at Roof Beam Reader! Please click on the link and take a look as I'm reviewing John Mullan's What Matters in Jane Austen: Twenty Crucial Puzzles Solved -- and I'm giving away a copy!

Update: The winner of the giveaway is . . . AUSTIN!!  Please contact me at karenlibrarian13 [at] yahoo [dot] com with a good mailing address so I can mail your prize! Congratulations!
Posted by Karen K. at 10:37 AM No comments: