1954 Club: Who Was Changed and Who Was Dead by Barbara Comyns 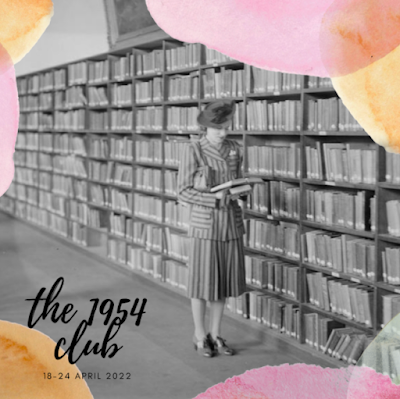 Within a few weeks funerals were to become a common occurrence in that village; but at this time they were rather scarce and looked forward to eagerly.

I've read several books by Barbara Comyns and was delighted to find out one of them had been published in 1954 -- perfect for Simon and Kaggsy's 1954 Club event. Even better, I found out my local library had a copy of this book, a weirdly twisted take on village country life. 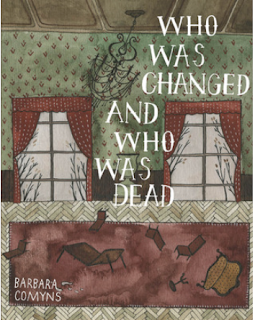 Set in Warwickshire during the early part of the 20th century, the story begins with a flood so high that ducks are swimming through the windows of the Wildweed family home, a large household consisting of Ebin Wildweed; this three children, Emma, Dennis, and Hattie; the matriarch, Ebin's cantankerous mother; and two servants, sisters Norah and Eunice. The banks of the nearby river have overflowed into the house and caused havoc throughout the surrounding villages.
The ducks swam through the drawing-room windows. The weight of water had forced the windows open; so the ducks swam in. Round the room they sailed quacking their approval; then they sailed out again to explore the wonderful new world that had come in the night. 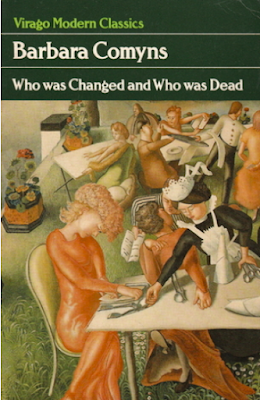 It's the beginning of June and the floodwaters soon subside. What follows that summer is slightly sordid and increasingly unsettling; quirky and eccentric behavior among the village residents turns dark, violent, and tragic. I should probably give more details about the plot but I don't think I can without giving too much away.
This book was a quick read, less than 200 pages in a smallish paperback format. I could have probably read it in one sitting, but I did have to take breaks because I found it a little creepy. I've read six of Comyn's books and they've all been darkly quirky in a similar way. 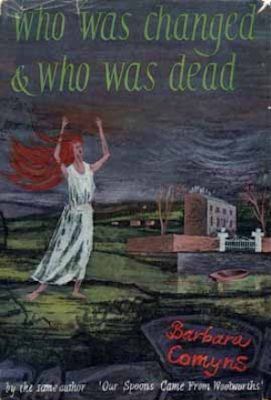 Some of her other novels have recently been reprinted by Turnpike Books and also by Daunt books; I've already ordered one of them, Mr. Fox. A couple of her works are nearly impossible to find, hopefully the reprints will find an audience and the others will follow.
Thanks again to Simon and Kaggsy for organizing this reading event! I'm hoping to read two or even three more novels so fingers crossed I'll get them finished and posted in time.
Posted by Karen K. at 1:24 PM 8 comments:

1954 Club: Jeeves and the Feudal Spirit by P. G. Wodehouse 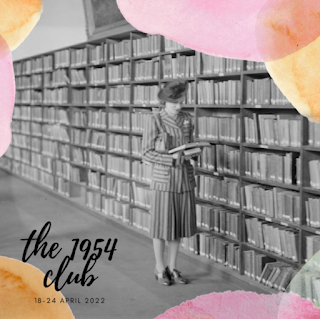 It is both amusing and amazing to me that P. G. Wodehouse was able to recycle his own plots and characters over the course of his seventy year writing career. By my count, I've now read 25 of his works, as novels and short story collections. Wodehouse tropes abound in Jeeves and The Feudal Spirit. I'm always looking for an excuse to read more Wodehouse, and the timing couldn't have been better as I could count it for Simon and Kaggsy's 1954 Club!  It runs this whole week from April 18 to 24.
Bertie Wooster and his valet Jeeves return for their eleventh adventure and with them some beloved returning characters and situations. Somehow Bertie just never learns to avoid young upper-class women who want to marry him and mold him into respectability, their jealous ex-fiancés who want to sock him, and devious aunts who want him to commit petty crimes. Naturally the faithful Jeeves with his superior brain power is there to save the day (and Bertie's skin).
In this installment, Bertie has been summoned to help Aunt Dahlia out of yet another scrape -- she's desperately trying to unload her women's magazine, Milady's Boudoir, to a wealthy publisher, and has enlisted Bertie to help wine and dine him, in London and at Brinkley Court, her country estate. She has also tasked Bertie with picking up a pearl necklace for her in London from a jewelry store. Little does Bertie know that Aunt Dahlia has made a cheap copy of some extremely valuable pearls, which she has subsequently pawned to infuse cash into her insolvent periodical. She is in a panic because her husband Tom is planning on showing off the pearls to another weekend guest, Lord Sidcup, a supposed expert of antiques and jewelry.
Bertie is also in the soup, so to speak, because the Brinkley Court guest list includes Florence Craye, a strong-willed young writer who has managed to entangle the unwitting Bertie into an unwanted engagement. She's on the rebound after jilting her overbearing fiancé, D'Arcy "Stilton" Cheesewright, who has appeared to have it out with Florence and wring Bertie's neck. It also includes the aforementioned publisher, Trotter; his social-climbing wife; and his stepson, Percy Gorringe, a playwright who is adapting Florence's novel for the stage, and is madly in love with her.
You always know what you are getting with Wodehouse, and therein lies the charm. I don't really want to time-travel to aristocratic England between the wars, but it would be amusing to be a fly on the wall and observe the hapless Bertie in all his slapstick charm. It honestly doesn't bother me that Wodehouse recycles plots and character types -- they're so beautifully drawn and so funny, just the thing if you need a light read, and who couldn't use some diversion right now? 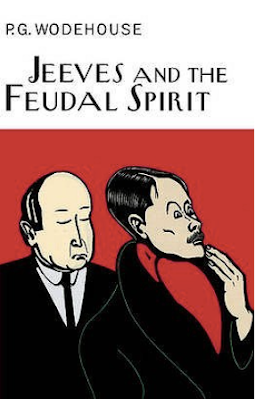 And now time for a little bonus Wodehouse! If you like musical theater, I strongly recommend watching the upcoming TV broadcast of Anything Goes, airing in the US this May on PBS Great Performances. It had a short run on the big screen in US theaters in March and I was lucky enough to go see it. It's a professionally shot recording of the 2021 West End production starring Sutton Foster (currently starring on Broadway in The Music Man). Wodehouse co-wrote the original book, lyrics by Cole Porter. The plot is classic Wodehouse, about wacky characters on an ocean liner in the 1930s. There are mobsters, star-crossed lovers, a ridiculous English lord, and an American cabaret singer, giving ample opportunity for hijinks and great musical numbers. It was an absolute joy to watch and I can't wait to watch it again. I suspect I'll save it on the DVR so I can watch the fabulous tap dancing numbers again and again.
Here's the preview from Youtube:
So -- my first read for the 1954 Club! I have two or three more I'd like to read for this event, hopefully I'll get through them all. What are you reading for the 1954 Club?
Posted by Karen K. at 10:57 AM 10 comments: