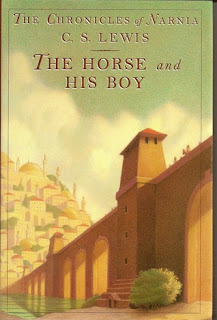 Sorry to have been away from the blog for so long, but, unfortunately I've been nursing a nasty ear infection for the past week.  I've managed to read a few comforting books, though I've been a little too foggy to put together enough coherent and insightful thoughts to write an actual book review.  (Though I have been gratefully reading lots of other brilliant and clever postings!)  Hopefully, I'll spend the holiday getting caught up and start posting again soon.

In honor of my little sick leave, I'm posting a short list of some of my favorite comfort reads (in no particular order):

1.  Harry Potter and the Sorceror's Stone. The book that made me fall in love with the wizarding world.  It will always be my favorite of the entire series.

2.  The Chronicles of Narnia.  My favorites are The Lion, the Witch and the Wardrobe and The Horse and His Boy.  Though Prince Caspian and The Voyage of the Dawn Treader are awfully good. . .  . okay, pretty much the whole series except The Magician's Nephew and The Silver Chair, both of which I found to be dreary and depressing.

3.  Pride and Prejudice by Jane Austen. [Spoiler alert!] Elizabeth realizes Mr. Darcy isn't such a horse's ass after all, they fall in love, and all is right with the world.  Sigh.

4.  Persuasion.  See #3 and substitute Anne Eliot and Captain Wentworth for Lizzie and Darcy. 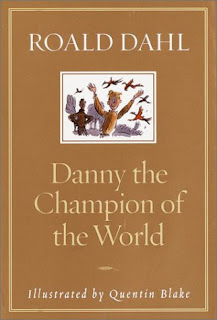 5.  Danny, the Champion of the World, by Roald Dahl.  By far my favorite Roald Dahl book, and curiously, one of the few without magic.  I love the relationship between Danny and his father.  The great pheasant caper is pretty cool also.

6.  A Tree Grows in Brooklyn, by Betty Smith.  Poor Francie Nolan's life is so terrible, so why is this story so comforting?

7.  To Kill a Mockingbird by Harper Lee.  My favorite parts of this book are about the minutiae of life in a small town in the South.   This book just gets better as I get older.

8.  The Witch of Blackbird Pond by Elizabeth George Speare.  One of the best historical juvenile books ever.  It even makes me want to go back to Colonial Times -- and I don't do so well without running water.

9.  Ozma of Oz by L. Frank Baum.  Dorothy's back in Oz after a shipwreck with a talking chicken. There are also trees with lunch boxes and dinner pails growing on them, a Hungry Tiger, and a princess with multiple heads -- what could be better?  How about Dorothy standing up to the princess who wants to trade heads with her -- "I b'lieve you won't!!"  You go, Dorothy! 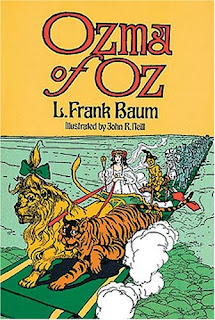 10.  Rebecca by Daphne du Maurier.  Is it weird that a creepy gothic novel is comforting?  A young woman marries a much older widower who brings her back to his big scary mansion, complete with a creepy housekeeper who's obsessed with the first wife -- sounds comforting, right? Still one of my favorites.

So, bloggers, which books do you turn to when you're sick or cranky?  Childhood reads, mysteries, chick lit?  I'd love to know what other people find comforting.
Posted by Karen K. at 6:50 PM 12 comments:

In honor of Veteran's Day I've created a list of my Top Ten War Stories.  Thanks to Suey for the inspiration!  In no particular order: 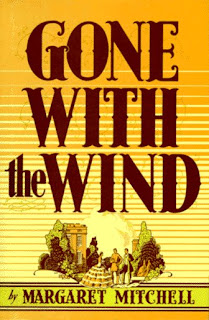 Gone With the Wind by Margaret Mitchell.  Yes, it's racist, but Scarlett is so spunky, and I'm always interested in reading about wars from the perspective of the home front.  I'm not really into battles and action sequences.

The Book Thief by Marcus Zusak.  Death narrates the story of a young orphaned German girl during WWII.  I cried like a baby at the end.

A Very Long Engagment by Sebastien Japrisot.  A heartbreaking look at WWI France, and its aftermath.  Also a great movie adaptation.

Summer of My German Soldier by Bette Greene.  A 12-year-old Jewish girl living in the American South befriends a German POW. One of my favorite young adult books of all time.

The Complete Maus by Art Spiegleman.  The groundbreaking graphic novel, one of the best books about WWII I've ever read.  Not to be missed.

The Old Wives' Tale by Arnold Bennett A great unappreciated book about the very different lives of two Victorian sisters. One of the sisters, Sophia, is trapped in the siege of Paris during the Franco-Prussian War. Scary.

The Guernsey Literary and Potato Peel Pie Society by Mary Ann Shaffer and Annie Burrows.  On the lighter side of WWII fiction, but a great read.  I never knew that the British Channel Islands were invaded by the Germans during the war.  It's mostly in letters, which I always love, and it's about a book group in wartime! 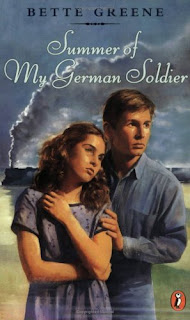 The English Patient by Michael Ondaatje.  Another heartbreaking love story.  I think I liked the movie adaptation even more than the book, even though Colin Firth plays a real ass.

Stones From the River by Ursula Hegl.  And interesting look at WWII, from a German viewpoint.  This book had great insight into how the Germans tolerated the rise of Nazism, until it was too late.  One of the best of Oprah's books.

A Tale of Two Cities by Charles Dickens. Not my favorite Dickens, but still, great writing, and a frightening look at the French Revolution.

So -- which books have I missed?  Suggestions from the blogosphere?
Posted by Karen K. at 9:28 PM 19 comments: 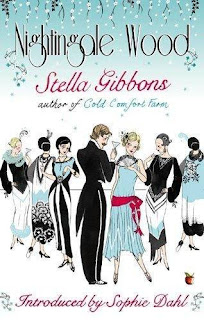 Oh, I am so behind on my book reviews.  I still haven't reviewed all the books that I read during Readathon, and now my vacation books.  Well, now that I'm back I'll hopefully be able to catch up. I'm going to start out with Nightingale Wood, the first book I read on my trip.  (Technically, I started it a couple of days before I left, but since I finished it on the airplane to my recent vacation, I count this as a vacation read.) And it was just the thing -- light, funny, and not too mentally taxing.

I really enjoyed this book.  The only other book I'd heard of by the author, Stella Gibbons, is Cold Comfort Farm, which is a charming satire of British pastoral fiction, full of quirky characters and a rather know-it-all heroine.  Nightingale Wood isn't really like that -- yes, Gibbons does poke fun at some literary archetypes like the stodgy English lord-of-the-manor, and the rich playboy-type, but this is more of a Cinderella story.

So here's the setup.  The book is set about the 1930s, I'm guessing after the stock market crash.  In her early twenties, Viola Withers is newly widowed and broke.  She was briefly married to the only son of a somewhat wealthy family, and is forced to move in with her in-laws due to her reduced circumstances.  So she leaves London to live in the country with her stodgy, money-obsessed father-in-law, her rather bland mother-in-law, and her two sisters-in-law; one of whom is secretly in love with the handsome young chauffeur, and the other who wants nothing more than to play golf and raise dogs.  There's another wealthy family nearby, with a handsome son Victor, who's all but engaged to a bitchy socialite.  Viola, a former shopgirl, is pretty, sweet, and not terribly intelligent, but her presence in the dull countryside shakes things up a bit, especially when she meets her Prince Charming at the annual charity ball.

Since this is sort of a twist on a fairy tale, some people might consider this chick lit.  However, I found it so much more original and joyful than most of the chick lit available these days.  Yes, it has romance, a young single woman, and a happy ending, but it's much more than that.  Viola isn't terribly bright, but we're still rooting for her and for all most of the other single women in the story, her sister-in-law Tina and Victor's bookish bohemian cousin Hetty.  Gibbons also puts a little twist on some of the other typical characters, like the village hermit and the hot young chauffeur.  Nightingale Wood lacks some of the biting satire of Cold Comfort Farm, but Gibbons gets some good digs in, particularly about readers and writers.  Here's a description of Victor's cousin Hetty:

"Hetty had taken after her father's side, the unsuccessful (that is, poor) Franklins who were all teachers and parsons and librarians, and as dull as ditch-water, with their noses in books, their socks in holes and their finances in muddles.  Hetty was a disappointment.  All that Mrs. Spring [her aunt] could do with Hetty was to let Victor see that her investments did not go down, while she herself chose her clothes and tried to marry her off."

I suppose I found that amusing (instead of being offended) because I'm both a bookworm and a librarian!  Of course, most of the librarians I know are extremely interesting people.  And here's what Viola's sister-in-law Tina is thinking when she takes her first driving lesson from the family chauffeur:

"She was not a fuzzy person like Viola; had she been, she might have married, for the distressing truth is that the fuzzies usually do; men like them.  She had kept her brain exercised by reading heavyish books, which might not always be truly wise but at least were not those meringues of the intellect, those mental brandies-and-sodas -- novels."


Oh, shocking, the reading of novels!  I hope my fellow book-bloggers are giggling over this instead of snorting in disgust.   I prefer to think that Gibbons is actually poking fun at people who don't read novels, since she wrote 25 novels in her lifetime, plus short stories and poems.  Oddly enough, she's best known for her Cold Comfort Farm, her very first novel, and that which is most widely available.  Nightingale Wood was only just reprinted here in the U.S., and sadly, I don't think any of her other books are still in print here.  Like the works of Winifred Watson, author of Miss Pettigrew Lives For a Day, it seems Gibbons' novels have fallen out of favor.  Hopefully publishers will start reprinting more of her books.
Posted by Karen K. at 9:46 PM 15 comments: