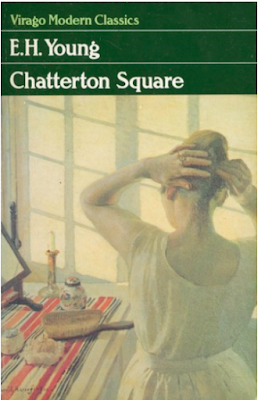 He pitied widows, but he mistrusted them.  They knew too much.  As free as unmarried women, they were fully armed; this was an unfair advantage, and when it was combined with beauty, an air of well-being, a gaiety which, in a woman over forty had an unsuitable hit of mischief in it, he felt that . . . all manhood was insulted . . . But he knew how to protect himself.

I bought Chatterton Square back in 2017 after Simon raved about it on his wonderful Tea or Books? podcast, and it would probably still be languishing on my bookshelves if my book group hadn't chosen it for their May read. (Yes, I did selfishly suggest it because I've been wanting to read it for so long!). I'm not a huge fan of Zoom but I do love that I'm finally able to see members of this group face-to-face, especially since many of them live in the UK. The group meets this afternoon to discuss it but I wanted to knock out a post of my own independent thoughts.
This is another lovely Virago book in which not much seems to happen, but also a lot of things are happening. Chatterton Square by E. H. Young is the story of two families, the Frasers and the Blacketts, who live in the eponymous Chatterton Square in Radstowe, a thinly disguised version of Bristol. The Frasers are a single-parent household headed up by the beautiful Rosamund, and her five children. It's never said exactly how old the children are but the eldest Felix is just qualifying to be a lawyer, and the youngest two, Sandra and Paul, are still in school, so I'm guessing they're in their early teens. In the middle are James, a university student, and Chloe, who has finished school and is working in a dress shop. Their father, Fergus, is some sort of writer and has been absent from the house for several years, having absconded to somewhere on the Continent.
The household is completed by Miss Agnes Spanner, Rosamund's childhood friend and a spinster of many years. Rosamund grew up in the house and Agnes was the daughter of her father's business partner. After her parent's death she moves in next door to the Blacketts, headed up by Herbert Blackett, one of the best-drawn and most annoying men I have ever encountered in literature, a self-absorbed, snobbish, judgmental narcissist, and never have I wanted to much to jump into a book and verbally slap someone. The Blackett household also includes his long-suffering wife Bertha,who seems sweet but downtrodden, and his three daughters, one of whom, Flora, takes after him exactly.
Mr. Blackett sneers and belittles the Frasers to his own family at every opportunity, though he's secretly attracted to the free-spirited Rosamund. He also looks down on Mrs. Blackett's cousin Piers, a disfigured war veteran who has bought farm nearby and comes into town to sell vegetables. Blackett has always disliked Piers, ever since he returned from the war on the eve of his marriage to Mrs. Blackett, when he realized his bride cared more for her cousin but would never back out of her wedding; sadly, she realized on her honeymoon that she was trapped in marriage to a pompous ass. A friendship has struck up between Piers and Rosamund, which is another reason to dislike them both.
Meanwhile, their are potential relationships brewing between the children. James Fraser and Flora Blackett are students at the same university and have developed a mild flirtation, and middle daughter Rhoda has begun borrowing books from Miss Spanner. All of this is taking place under the cloud of potential war, which Mr. Blackett insists will never happen. As the book was published in 1947, contemporary readers, like ourselves, feel the tension since we know the inevitable is coming, which ratchets up the tension in the book.
I loved this book, though it took longer than I expected -- normally I can zip through a novel in just a few of days, but this was a fairly dense read. There's a lot that's implied and unsaid, especially about current events in the novel, and I often found myself rereading passages to figure out what was going on. It was also a bit frustrating because there is a lot that is unresolved -- if you want your endings neat and tidy, you won't like the end of this book, but since it's set on the eve of WWII, it would be unrealistic to expect anything else.
What I loved most about this book is the characters and their interactions. As much as I dislike Mr. Blackett and his daughter Flora, they are beautifully developed villains, and I also how his wife Bertha began to grow and change. I also loved his middle daughter Rhoda who is my favorite character in the book.
This is the third book I've read by E. H. Young -- I loved both Miss Mole and The Misses Mallett. I have three more of her books unread on the TBR shelves and had intended to read Jenny Wren for the Back to the Classics Challenge; however, I may put it off a bit more and try to ration out my E. H. Young books as long as possible (I also own the sequel, The Curate's Wife, and William.) I'm so happy that I finally finished this and am so looking forward to our discussion because I'm sure everyone will have a LOT of opinions about it!
Posted by Karen K. at 11:11 AM 6 comments: 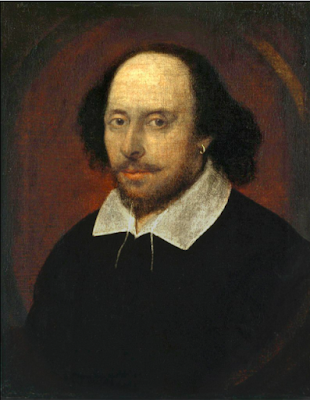 It then occurred to me that I could possibly finish all the plays in a whole year, maybe even by the end of 2021! (I'd also like to go back and reread all the plays we read in college, but probably not until after I've finished the whole list). Right now I'm trying to alternate comedies and tragedies -- I'm a bit intimidated by the histories and will probably do those last, in chronological order by monarch.
All the plays are available for audio download through my library in various editions. I really like the Arkangel Audiobook series, which has full cast recordings with amazing actors, mostly from the Royal Shakespeare Company. I've been alternating listening to the audio versions with reading the plays online and in print, often with the help of No Fear Shakespeare.
Just for fun I've been watching Upstart Crow on Britbox -- if you haven't heard of it, it's hilarious, starring David Mitchell as Shakespeare. It's by the same creator as Blackadder and there are lots of in-jokes about Shakespeare and they satirize current events as well.
And I'm also hoping to make a trip to the American Shakespeare Center in Staunton, Virginia! They're already started their summer series -- two of the plays are indoors (socially distant) at their recreated Blackfriars Playhouse, and there's also an outdoor production of Macbeth. It's about a two to three hour drive from my home in suburban DC, so I could easily go in a weekend!
Bloggers, which Shakespeare plays are your favorites? And do you have any favorite stage or screen adaptations?
Posted by Karen K. at 12:33 PM 24 comments: