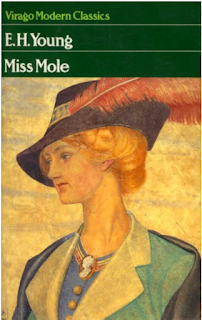 I am always envious when bloggers mention how they just happened to find a Persephone at a charity shop or a used bookstore. Other than the Persephone Classics, which don't have the distinctive dove-grey covers, they are is nearly impossible to find in the US, new or used. However, it's not unheard of to find Virago Modern Classics, both the lovely green-spined editions and the earlier Dial press editions with the black covers. There's a wonderful Half-Price Books location in Austin, Texas that is massive and I remember walking out with at least a half-dozen on one visit a couple of years ago. I also found quite a few at John King Books in Detroit back in 2016.

One of my finds (from Austin, I think) was a black spine copy of Miss Mole (circa 1985). First published in 1930, Miss Mole won the James Tait Black Memorial Prize for Fiction and is considered her masterpiece. I was inspired to add this to my TBR Pile Challenge list after Rachel and Simon discussed it on their wonderful podcast Tea or Books?

So, Miss Mole is set between the wars and is the story of Hannah Mole, a fortyish spinster who ekes out a living as a companion or housekeeper -- she has a sharp tongue and quirky spirit that sometimes get her into trouble. At the beginning of the novel she's returned after a long absence to the fictional town of Radstowe (which is a thinly disguised portrait of Bristol). Miss Mole is not getting along well with her current employer and after a few days in a boarding house, gets a new job via her cousin Lilla, who is from the wealthier side of the family and has some good contacts. Without revealing the family connection, Lilla recommends her for a job as a housekeeper of sorts for a rather stuffy, pompous minister named Robert Corder, whose wife has recently passed away.

The household consists of Reverend Corder, a nonconformist; daughter Ethel, who's rather desperately looking for a man so she can escape the house; young Ruth, who is still in school and longing for a mother figure; and their sassy cousin Wilfred, who's attending medical school nearby. Wilfred's presence in the house is rather awkward and raises a few eyebrows, but his mother is wealthy and the Reverend can't risk offending her. A spinster housekeeper/chaperone is exactly what they need to keep the house respectable -- or so they think. Miss Mole moves in and simultaneously elevates their lives and yet turns things upside-down. She's comforting and yet slyly subversive, and Reverend Corder doesn't quite know if he should appreciate her or fear her, as Hannah is smarter than he is. Wilfred takes to her instantly, recognizing her sharp wit, and Ruth grows to love her. Eventually, though, there are whispers about Miss Mole's background which much be addressed, and we learn the real reason for her long absence from her hometown.

The writing in this book was really great, very insightful, and the dialogue between the characters is especially sharp:

There was every reason why Ethel should have been an inefficient housekeeper, and every reason why Miss Mole should be a good one. At forty, all distracting desires, ambitions, hopes, and disappointments must have passed away, leaving the mind calm and satisfied with the affairs of every day, a state for which Ethel sometimes envied Miss Mole, more often pitied her. . . . They were all too young or too self-absorbed to understand that her life was as important to her as theirs to them and had the same possibilities of adventure and romance; that, with her, to accept the present as the pattern of the future would have been to die.

Mr. Blenkinsop was a solemn infant who asked for what he wanted and Robert Corder was a spoilt one who expected his needs to be divined.

"I often envy women," Robert Corder said. "They have useful and not exacting occupations for their hands, and no labor need be dreary."  Riiiiight.


I loved this book but for such a short novel (288 pages) it took me a surprisingly long time to finish it. The writing style is a bit quirky, but it took me more than three weeks to complete. This puzzled me but I realized part of the reason could have been the edition. The print was quite small, and there are a lot of pages that are one solid paragraph, or nearly so, which I find off-putting (fun fact: there is a Gabriel Garcia Marques novel that is ONE SOLID PARAGRAPH WITHOUT CHAPTER BREAKS. It's The Autumn of the Patriarch, and I can tell you right now that I will never, ever read it.) Also, this book is 40 chapters, most of them quite short, so there were a lot of breaks. I wonder if that made me more likely to put the book down instead of plowing through it.

This is my first book by E. H. Young, and I also own two others in the Virago imprint, The Misses Mallet, her first novel, and Jenny Wren, which apparently has a sequel also published by Virago. I also want to read Chatterton Square, which was beloved by both Rachel and Simon in the Tea or Books? podcast. I'll have to buy it but I feel like I work through some more of my unread Viragos (25 at last count) before I buy another which could just end up collecting dust on the TBR shelves.