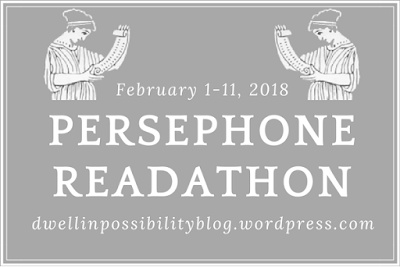 I love it when I can combine online reading events like the Persephone Readathon with my annual reading challenges. This week was the perfect time to cross another book off my 2018 TBR Pile Challenge List -- Lady Rose and Mrs. Memmary. I actually had THREE Persephones on this list, plus one possible read on my Back to the Classics Challenge list. (The others were Heat Lightning, London War Notes, and Effi Briest). To be perfectly honest, Lady Rose won out because it was the shortest, and because it was owned-and-unread the longest.

Basically, Lady Rose and Mrs. Memmary is a sort of a fairy tale about a little girl growing up in Victorian times on a massive Scottish estate called Keepsfield. Published in 1937, it starts out in the period between the wars when three tourists, two American and one British, stop to tour the empty house that belongs to Lady Rose, who has lived abroad for years. One of the tourists, a British woman, begins to engage the elderly housekeeper about the little girl who grew up there and begins to imagine what she was really like.

This book starts out rather saccharine and almost twee. Lady Rose as a child was so annoyingly perfect I almost gave up -- in fact, I did try to read this a few years ago and was so put off I put the book down and it was gathering dust until this week. All the reviews implied it would get better, so I stuck with it. It does get better after Lady Rose goes off to boarding school, then her life takes some interesting turns when it appears it isn't such a fairy tale after all.

Overall, this book was charming, but with a sad undercurrent about the position of women. It made some very good points about the choices women had in the late Victorian period -- but mostly didn't have, even the very wealthy and privileged. My basic impression is that the writing is a little flowery and there wasn't a whole lot of character development. Some parts actually felt more like broad outlines of a story than the finished product. There was some definite foreshadowing that I completely missed -- if you're clever you'll predict some of the plot twists. I wasn't especially observant at the time so I was pleasantly surprised by some of them. 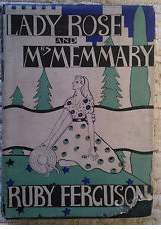 The best bits are Lady Rose's appreciation for the beauty of Scotland, and for Keepsfield, the estate on which she's raised. In the preface, it's described as "a love letter to Scotland," which is absolutely correct -- Keepsfield and Scotland itself are the best-developed characters in this book. (This is nothing like Outlander, though there are very brief mentions of men in kilts. Just in case anyone was wondering).

There are also some interesting descriptions of what it was like to come out in society in the Victorian era, and to be presented at court. However, there's a huge gap in time about Lady Rose's life after she leaves Keepsfield which I really wish had been more developed. I won't say any more because I don't want to spoil it for anyone.

Many people love this book. I enjoyed it, but I have to admit it's not my favorite Persephone. It was a charming, light read, and I could see it might be just the thing if you're having a bad day and need something escapist. It's a quick read and there are some quirky little illustrations. I think I read somewhere that it was a favorite of Queen Elizabeth's mother.

So -- Persephone fans, have you read this book? Did you enjoy it, or was it just a little too sweet? And which Persephone should I read next off my list -- Heat Lightning, Effi Briest, or London War Notes?
Posted by Karen K. at 1:52 AM