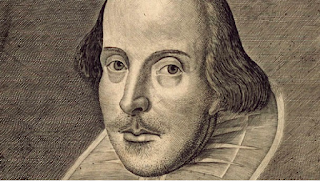 One of the best things about living near Washington D. C. is all the amazing culture that is so close to me. In addition to the the history, great museums, monuments, and restaurants, there is a wonderful theater scene -- more than 100 live theaters within a two-hour drive, from small community theater companies to the National Theater and the Kennedy Center.

I've been to a couple of events at the Kennedy Center, which is stunning, but what I like most are smaller theaters. One of my favorites so far is the Folger Shakespeare Theater, part of the beautiful and historic Folger Library, on Capitol Hill. It's closing soon for a major expansion and renovation, but I was able to get a ticket for the current production, The Merry Wives of Windsor.

I've been reading classics on a regular basis for more than ten years now, but my knowledge of plays is sorely lacking. I've only seen three plays performed live (Hamlet, The Tempest, and Romeo and Juliet). I did take a Shakespeare class in college, but that was a long time ago, and to be honest I can't even remember exactly which plays we read! (I know there were four tragedies and four comedies). However, I am quite sure that I haven't read The Merry Wives.

The Merry Wives of Windsor trailer

DC also has a regional theater company specializing in Shakespeare, though they perform other plays as well. The next play for the Shakespeare Theater Company is Timon of Athens, about which I know absolutely nothing (apparently it's not performed very often, but this production is gender-flipped and set in modern Greece). Much Ado About Nothing is scheduled for May, which sounds fun. The 2020/2021 season includes The Merchant of Venice and As You Like It, so I'm looking forward to both of those.

So here is my question for all my dear readers who are well-versed (or slightly versed) in Shakespeare: how important is it to have read the plays before attending the productions? Normally, I don't like to know too many details about a play before I see it, for fear of spoilers. But Shakespeare is something else entirely. I haven't read any of the plays for years, and I don't want to be completely lost before attending.

Readers, what would you suggest? Read the plays, or be surprised? And has anyone read or seen Timon of Athens?
Posted by Karen K. at 3:57 PM