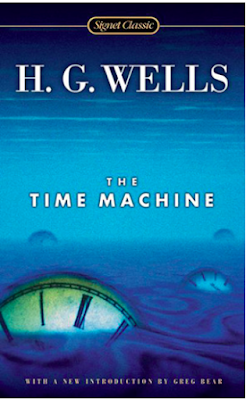 I was racking my brain to think of a novel for the Journeys and Travels category for the Victorian Reading Challenge when I thought of The Time Machine by H. G. Wells -- seriously, what could be a more fantastic journey than traveling through time? Though I'm not much of a science fiction reader, I really enjoyed my last foray into H. G. Wells, The Invisible Man. I'd been putting off this one because I saw the 1960 film adaptation as a child and it scared the bejeezus out of me.

Published in 1895, the story is narrated by an anonymous man who meets a mysterious scientist at his gentleman's club. As a group of men are sitting around waxing philosophically, a scientist, known only as the Time Traveller, describes his theory of time travel. Of course they scoff at his ideas, but accept his invitation to see the machine. The narrator and a few other men accept an invitation for the following week, but when they arrive at the Time Traveller's home, their host is absent. They begin dinner without him and are shocked at his dusty, haggard appearance when he finally arrives. Gulping his food like a starving man, he recounts a fantastic tale of traveling thousands of years into the future, to a world now populated not by humans but by the peaceful, beautiful Eloi. Things seem idyllic until the Traveller realizes things are much darker and more dangerous than he realized at first, and he is soon fighting for his own existence. 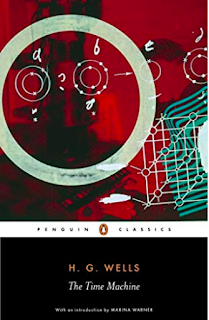 After a slow start, I raced through the book, which was much better than I expected, and rather different than the film version that I remember from years ago. It's short, only about 100 pages in most editions, and can easily be read in a single sitting. (I actually read most of it off my phone which I downloaded for free on iBooks). What surprised me most was how much Wells emphasized the environment and the future of mankind, so far ahead of his time. He also made some serious points about class warfare, which comes to an extreme in the book.

It's quite a page-turner and I loved the ending, which I found very poignant, and I'm very glad that I finally got around to reading it. I don't know if I dare watch the 1960 film version again, or even the 2002 adaptation starring Guy Pearce. The effects in the first version are probably pretty cheesey to modern viewers, but I'm very squeamish about horror movies. I'm pretty sure the newer version is even scarier. I'm not a huge sci-fi person but I know it's iconic.

And just for fun, here's a clip from a very funny episode of Big Bang Theory, in which Sheldon has a bad dream about time travel after purchasing a movie prop time machine. There's a bit of a spoiler in it, so don't watch it if you don't know the big twist from the novel.


I'm counting this as my Genre Classic for the Back to the Classics Challenge, and as my Journeys and Travels novel for the Victorian Reading Challenge.
Posted by Karen K. at 3:34 PM