Man and Wife by Wilkie Collins 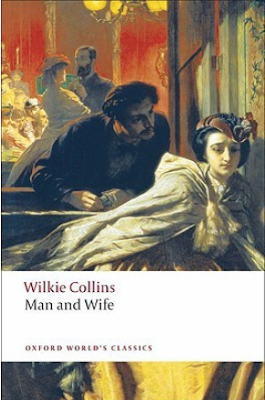 Victorian sensation fiction is SO MUCH FUN. If you read a Victorian sensation novel you are guaranteed many, if not all, of the following:
and just general bad behavior in Victorian times. They're generally pretty long (in order to fit all this in) but they aren't difficult reads and they are absolutely worth reading.

So. Man and Wife starts with two proper young Victorian ladies, aged about 18, on board ship. They are the dearest of schoolmates and vow to be friends for life. One of them, Blanche, is en route to India, where she eventually meets and marries a titled aristocrat; the other one, Anne, winds up in Italy, where she becomes a celebrated actress and singer.

Flash-forward 24 years later. Anne has returned to England from abroad and has married a younger man, Vanborough who is no longer as besotted with her as he once was. He's a social climber, and realizes that his wife is holding him back. He starts gallivanting about the county without telling anyone he's actually married, and finds a rich woman who would help him break into society and quite possibly, a successful career in politics. 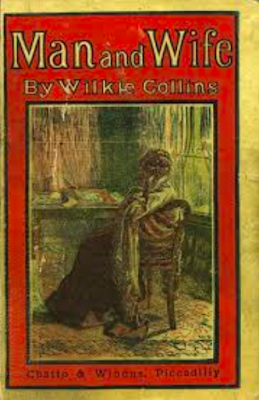 Vanborough finds a clever attorney who finds a loophole in their marriage paperwork: since they were married in Ireland by a priest, and Vanborough wasn't Catholic, the marriage is not technically valid. He uses this as an excuse to leave his wife and young daughter (also named Anne) and start a new life. His former wife eventually dies of heartbreak, leaving her daughter in the care of her old friend Blanche, now Lady Lundie.

Flash-forward again, about 12 more years. The younger Anne is now governess and best friend of Blanche's daughter, also called Blanche. Both her parents have died, and she lives with her widowed stepmother, the second Lady Lundie. Blanche II and Lady Lundie are hosting a weekend party one summer at their estate in Scotland, and two of the guests include Arnold Brinkworth and his best college mate, Geoffrey Delamayn. Arnold is a stand-up guy and is trying to work up the nerve to declare his love to Blanche and make her an offer. He's very different from Geoffrey, who can't be bothered to pick up a book and is something of a bounder, a ne'er-do-well; however, he's the best rower in Oxford, and once saved Arnold from drowning. He is also, coincidentally, the second son of Sir Geoffrey Delamayn, the somewhat unscrupulous lawyer who helped Anne's father slither out of his marriage to her mother. 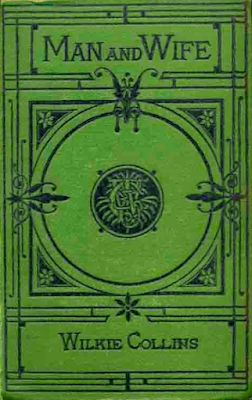 History begins to repeat itself with poor Anne Silvester, who just can't catch a break. She's caught up in a scandalous relationship and is trying to make it right, and everything seems to go wrong and spiral out of control, involving her best friend Blanche, Blanche's swain Arnold, and even Blanche's Uncle Patrick, the heir to her father's title and head of the family. Much of the action takes place in Scotland, and if you've ever read of Gretna Green, (a famous destination in Pride and Prejudice), you will learn more than you ever anticipated about Scottish marriage laws.

Like most Victorian sensation novels, Man and Wife is a real rollercoaster of a book, with many of the elements listed above. However, this book took a darker turn toward the end with the real threat of domestic violence, which I wasn't expecting. It does have some very funny moments, where the omniscent narrator injects some wry comments. Also, I particularly enjoyed the character of Sir Patrick Lundie, Blanche's uncle, who is the voice of reason in the book but also dryly amusing. I really enjoyed this book and after a bit of a slow start, I raced through more than 600 pages in a week because I just had to find out what happened next. This is my seventh novel by Wilkie Collins so far, and I really think this one is my favorite. 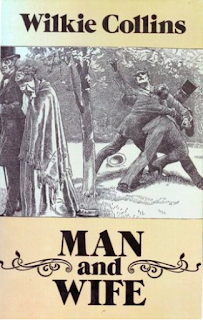 There are at least five more books by Collins that I still haven't read: The Frozen Deep, Basil, Hide and Seek, The Dead Secret, The Evil Genius, and Jezebel's Daughter. They all sound really scandalous and over the top, I can't wait to read them all.

I'm counting this as my second book for the Victorian Reading Challenge, for the Love & Marriage category. I'm also counting it for my 19th Century Classic for the Back to the Classics Challenge.
Posted by Karen K. at 4:16 PM