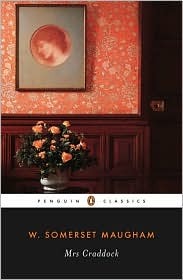 I'm very pleased to have finally finished Mrs. Craddock.  I'm a big fan of W. Somerset Maugham, and a couple of years ago I bought this one on the recommendation of Amanda from Ramblings.  We're in the same real-life classics book group at the library and we both love Maugham.  Our group read The Painted Veil back in 2009 and I loved it, and we're also discussing Of Human Bondage in June -- I read it years ago and it was one of the first classics I read for pleasure, so I'm really looking forward to re-reading it.

But back to Mrs. Craddock.  This is one of Maugham's lesser-known works -- in fact, I'd never even heard of it until Amanda recommended it.  My library didn't even own a copy, hence the purchase.  I think that's a real shame because I thought it was excellent.  And short -- it's only 268 pages, including footnotes.  If you're looking for a good short classic, look no further.

Basically, Mrs. Craddock is the story of an unhappy marriage in the late Victorian period. Young Bertha Leys returns to England after the death of her father, with whom she lived abroad for many years.  She's living with her Aunt Polly at the family estate, Leys Court, and falls in love with an attractive young man from her childhood -- it's one of the tenant farmers, Edward Craddock.  Despite the class differences, she is determined to have him.  There's a bit of grumbling from the family doctor and some snide comments from the neighbors, but Edward is a good, solid young man, and there aren't many other prospects for headstrong young Bertha, who is madly in love.

What follows is the breakdown of their marriage, at least from Bertha's point of view.  I wouldn't say this book is defending the arguments about marrying outside one's class, but more about how hard it is to marry someone with whom one has essentially nothing in common.  After the initial sexual attraction begins to wear off, these two people really have nothing in common.  Edward is a good man, but he's not very educated, and not interested in books or music or travel or anything that Bertha likes.  He wants to be the country squire, which he does successfully.   Of course, now that they're married, everything belongs to him.  She tries to make the best of things but is faced with one heartbreak after another.

This sounds really sad, and parts of it are, but the writing in this book is just wonderful, so I hope I haven't discouraged anyone from reading this book.  And surprisingly, parts of this book are actually really funny -- Bertha's Aunt Polly has quite a sharp tongue and she is the queen of the one-liners.  I'd love to see her go head-to-head with the Dowager Countess of Grantham on Downton Abbey (also known as Maggie Smith).  In fact, Countess Violet would have been nearly the same age as Aunt Polly 30 years before, when the book begins, so there you are.

Here's a couple of great lines from Aunt Polly.  Every time I read them, they sound just like Maggie Smith:

On marriage:  "Most people when they get married fancy they're doing quite an original thing.  It never occurs to them  that quite a number of persons have committed matrimony since Adam and Eve."

On class differences:  ". . . each set thinks itself quite as good as the set above it and has a profound contempt for the set below it.  In fact the only members of society who hold themselves in proper estimation are the servants.  I always think that the domestics of gentlemen's houses in South Kensington are several degrees less odious than their masters."

This book counts towards two challenges:  The Classics Challenge 2012 and the TBR Pile Challenge 2012.  I guess I could even count it towards the Victorian Challenge, since it was technically written in 1900 (though not published in 1902, so maybe that's dubious).
Posted by Karen K. at 9:14 AM