During the mini-break I took from blogging, I did not stop reading -- frankly, I can't NOT read.  As Harper Lee wrote in To Kill a Mockingbird, "Until I feared I would lose it, I never loved to read.  One does not love breathing."

Anyhow, whilst on my break, I was in need of some light entertainment to break up some of my heavier reads, including two books from my TBR shelf that happened to be alternates from my 2012 TBR Challenge.  It's been a few weeks since I read them, but I'm really anxious to post something so I can officially complete the challenge!! 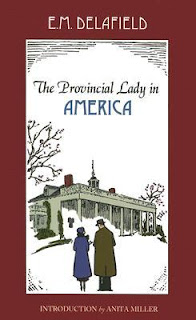 First, I read The Provincial Lady in America by E. M. Delafield back in early October, mostly while waiting in an emergency room for treatment for an ear infection.  (It's a very quick read -- lots of white space on every page, HUGE margins. And charming illustrations!)

If you are not familiar with the Provincial Lady, this is sort of a 1930s version of Bridget Jones' Diary, but if Bridget were older and married, with two children, a husband, and a couple of servants in a small country house.  This is the third book in the series.  The first book is a thinly veiled account of her daily life; in the second, the Provincial Lady has had great success publishing the first book, and is spending more time in London, working on her writing and meeting the literati and all kinds of interesting people.

In this third volume, the Provincial Lady goes on a whirlwind literary tour of America, crossing the Atlantic in rough weather, meeting all kinds of people -- some pushy, some fawning, but mostly very nice.  It's fun to read her impressions of America, especially when she visits the Midwest, from which I hail.  However, this having been published in 1934, it's somewhat racist, and I found myself cringing when she refers to Negro porters and makes some very un-PC comments.  It wasn't quite as fresh and funny as the first book, but I definitely enjoyed it overall.  There are two more volumes about the PL, in which she visits the Soviets, and then the final volume, during WWII, which do sound interesting.  My library doesn't have a copy of the fourth book, but they do have the last one, which is good because it's out of print and used copies are horribly expensive. 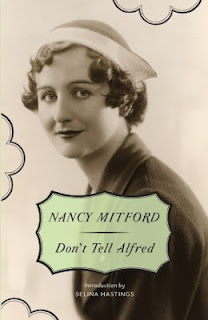 The final book on my TBR Challenge Pile (well, excepting a book of short stories, on which I've given up) is another alternate read, Don't Tell Alfred by Nancy Mitford.  I had three unread Mitfords on the TBR shelf, purchased and received after I read Love in a Cold Climate and The Pursuit of Love with great delight.  However, it had been several years since I read the first pair of Mitfords, and that made it harder -- I remembered Fanny, the narrator, who's now older, but I'd almost completely forgotten all the rest of the characters.  Also, quite a bit of time has passed -- Fanny's now middle aged, (though naturally she hasn't changed a bit and can still fit into the same dress size); and two of her three sons are all grown up now.  The third is at prep school with her adopted son, child of her late cousin, the scandalous Linda Radlett.

Set in the late 1950s, Fanny's been leading a quiet life as the wife of an Oxford don when her life is turned upside down by the news that her husband Alfred has been appointed the Ambassador to France!!   Suddenly, she finds her self embroiled in diplomatic tangles, a clash of cultures with the French, government upheavals, a twittering social secretary, and relatives that are driving her up a wall. Hilarity ensues -- it's sort of like a low-key late 1950s screwball comedy, set in an Embassy.  Fanny is the voice of reason throughout, it's all the surrounding people that are constantly causing trouble.

I did like it, though I had a hard time relating to what was going on -- I suppose it would help if I knew more about late 1950s French politics;  apparently, there were constant changes in government and votes of no-confidence and that sort of thing.  Also, since it had been a few years since I'd read the first two books, I had a hard time remembering who all the other characters were.  One side character, Grace Allingham, is actually the subject of a different Mitford book, The Blessing, and when I chose Don't Tell Alfred I didn't realize there was another book in between -- I wondered if I'd skipped a book.  Also, it ended really abruptly, and felt almost unfinished, like Mitford had run out of things to say.

Anyway, this was a funny, light read, though I didn't enjoy it as much as the first two.  I will have to go back and read The Blessing, and another Mitford novel, Wigs on the Green, which is on the TBR shelf.  I also have a biography of the Mitfords, The Sisters by Mary S. Lovell; plus I picked up Hons and Rebels by Jessica Mitford on a bookstore sale table last year.  The Mitfords were such an interesting family and I want to learn more about them.