The Swiss Summer by Stella Gibbons 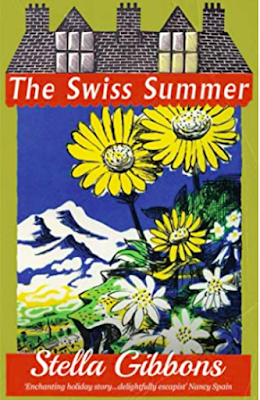 I love that Dean Street Press has re-published so many out-of-print women authors in their Furrowed Middlebrow imprint -- some of the more obscure books from my favorite authors are nearly impossible to find, and many of them are shockingly expensive! They recently released a whole slew of midcentury middlebrow books, which are delightful comfort reads. My latest was The Swiss Summer by Stella Gibbons, a prolific author best known for the hilarious Cold Comfort Farm. Though The Swiss Summer doesn't have quite the biting wit and satire of her best-known work, it's still a delight to read.
First published in 1951, it's the story of a group of English people spending the summer at Chateau Alpenrose, a chalet near Interlaken. The main character, a fortyish woman named Lucy Cottrell, meets Lady Dagleish, the owner of the chalet, while visiting her old friend, wife of the local vicar. The chalet was a gift of the Swiss government to her husband, a famous mountaineer. Lucy learns that Lady Dagleish is sending her paid companion, Freda, to spend the summer inventorying the contents of the chalet, and on a sudden whim, invites the envious Lucy to go accompany Freda for the summer. Delighted at the chance to leave dreary postwar London, Lucy eagerly accepts, and three weeks later finds herself in a picturesque chalet among breathtaking surroundings, with a woman she barely knows, and a curmudgeonly Swiss cook/caretaker, Utta. 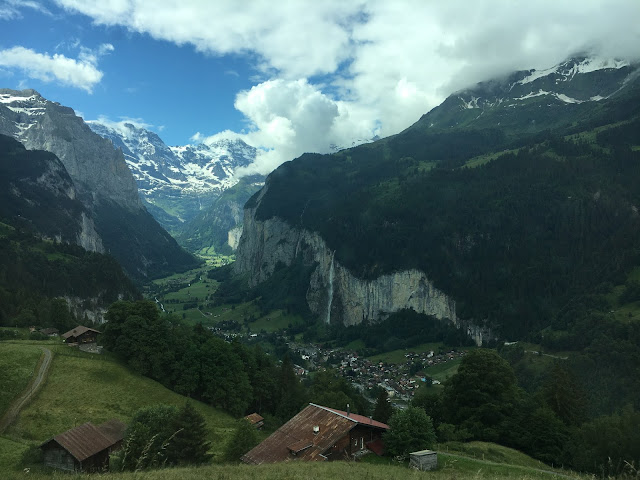 I like to imagine the view looked something like this.
Things go well at first, and Lucy enjoys helping Freda and exploring the nearby surroundings, breathing in the fresh mountain air. But the summer's plans take a detour with the arrival of Astra, Freda's nineteen year old daughter, who has left her with wealthy family. She's gawky and awkward and doesn't know what to do with her life, but begins to form a friendship with the childless Lucy, who's always wanted a daughter. Things are further complicated when more visitors arrive -- the Price-Whartons, friends of Freda, with their snobbish daughter Kay, Astra's only friend. Meanwhile Lucy had already invited her outdoorsy godson Bertram, a forestry student, who brings his flatmate Peter.
Meanwhile, the cantankerous Utta resents all the visitors, especially Freda, whom she believes to have ulterior motives about the future of the chalet. Lady Dagleish has hinted in the past she'll remember Freda in her will, but she likes to amuse herself by manipulating people, and she eagerly awaits letters from Lucy to find out what's happening in Switzerland. Naturally it all plays out to a very interesting and sometimes unexpected ending. 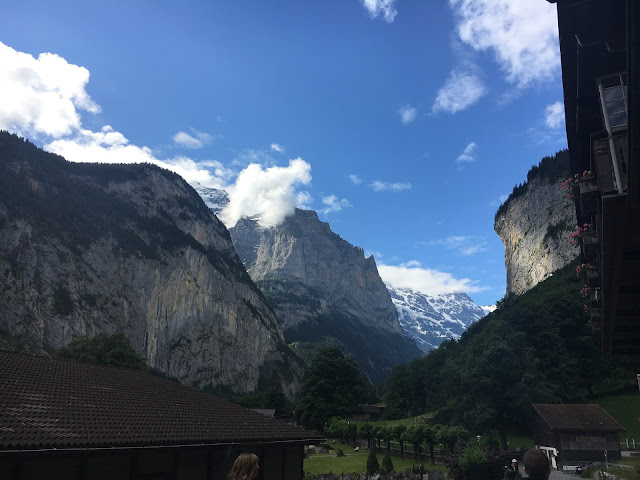 I really enjoyed this book -- it's a quick read and I finished it in just a couple of days. I did have an idea of how it would end, but not exactly how it would all play out, and Stella Gibbons also drops in a few bombshells about the future of some of the characters, making me wish she'd included an afterward or even a sequel about some of them. My only quibble with this book is it's sometimes really sexist -- the young men Bertram and Peter make some pronouncements about women's roles that are pretty cringey, though I'm sure it's not out of character for the early 1950s. But seventy years later it did make want to jump into the book and give them a piece of my mind.
Nevertheless, this is a fun book with interesting characters and lovely descriptions of the mountains, and it would be a lovely vacation read, ideally while sitting a balcony overlooking the Swiss Alps. I hope to read more of the new Furrowed Middlebrow titles soon as possible.
I'm counting this as my Swiss selection for the European Reading Challenge.
Posted by Karen K. at 1:49 PM