The Winter of Our Discontent by John Steinbeck 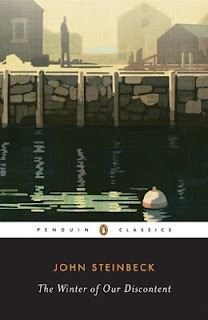 Wow, what a great start to the year.

The Winter of Our Discontent is probably one of the less popular Steinbeck works, and I think that's a shame.  I discovered how much I love Steinbeck's work the a couple of years ago, but I just could not get back to reading him -- he's been pushed aside lately by those pesky British writers, particularly the Victorians.  This book probably would have remained far, far down on my to-read list, but at a recent book group meeting, one of our members mentioned how much this book meant to her -- even after multiple readings, she still got something different out of it every time she read it.  She was so passionate about it, we were intrigued, so it was our group's January selection. Quite simply, it's brilliant.

Without spoilers, I'll give a quick setup of the plot, and get down to why this book is so great.  Set sometime after WWII, this book is the story of Ethan Allen Hawley, who lives in a small fishing town somewhere in New England.  He comes from a long line of patriots and shipmen (hence, the name), but past generations have not done so well.  They've lost all their fortune and land, and after the war, Ethan came back to run the family grocery store, but he failed at business and now he's working for an Italian immigrant as a clerk in what was once his own family's business.  His wife and teenaged children are embarrassed by his lack of ambition, but Ethan seems to be a good, moral, upstanding member of the community.  However, one spring day (not in the winter) his moral resolution seems to waver, and begins to consider some immoral acts.  This book made me think about human nature, greed, ambition, right and wrong.  This book is so interesting on so many different levels.

Francis Bacon once said that "Some books are to be tasted, others to be swallowed, and some few to be chewed and digested."  That's how I felt about this book.  I could have read it pretty quickly, since I didn't find it to be a difficult read; however, I found it necessary to stop every thirty pages or so and put the book aside so I could absorb it.  I was completely transfixed by the story, and I found this character to be fascinating -- would commit an immoral act, and if so, which one? 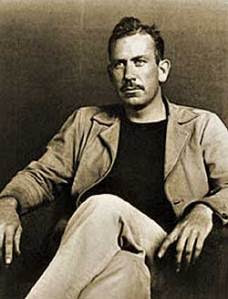 Several years ago, when I decided to atone for my poor knowledge of American literature, the thought of Steinbeck made me quake in my boots. I had visions of dust bowls, wrathful grapes, and the dreary Joad family. However, I had joined an online classic book group, and I was too determined to give up. Besides, the group's selection was Travels with Charley: a guy travels around the country with his dog. I like travel, and I love dogs, so I took the plunge. To my complete and utter astonishment, I loved it. I was a complete convert. This was soon followed by The Grapes of Wrath, which I could not put down, Of Mice and Men, Cannery Row, and The Pearl. Still waiting on my to-read shelf: East of Eden and A Russian Journal.

Most people who haven't read Steinbeck don't realize that his work is really quite easy, and that it's not all doom and gloom. He has a wry sense of humor, and sometimes he's downright hilarious. (If you don't believe me, read Cannery Row. The chapter about the frog-catching expedition is one of the funniest things I've ever read). And the writing is really, really wonderful, and insightful. Steinbeck throws in these one liners that really make me stop and think. For example, Ethan is thinking about the books in his attic, and particularly about Hans Christian Andersen:

A man who tells secrets or stories must think of who is hearing or reading, for a story has as many versions as it has readers. Everyone takes what he wants or can from it, and thus changes it to his measure. Some pick out parts and reject the rest, some strain the story through their mesh of prejudice, some paint it with their own delight. A story must have some points of contact with the reader to make him feel at home in it. Only then can he accept wonders.

Great advice for any writer or reader.

So how does everyone else feel about Steinbeck?  Does the very sound strike fear in your heart?  Do you have a favorite?  Please let me know since he's one of my must-read authors for 2010.
Posted by Karen K. at 10:52 AM