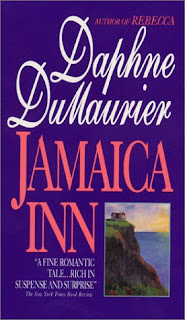 Is it fair to judge a book by its cover?  I know, it's a total cliche.  But really, I think the cover of this book pretermined how I was going to feel about it.

I rarely read mass-market paperbacks.  I know, part of it is snobbery -- I spend too much time searching through the library's romance paperbacks while I shelve as a volunteer, and a lot of them are just dreadful-looking bodice rippers, which is so not my thing.  (However, if it is your thing, you might enjoy this clever book blog.) Maybe trade paperbacks just remind me of Quality Literature.  Actually it's probably just that I like bigger print and larger margins. I could just get reading glasses!

Quickly, here's the setup:  It's the early 1800s, and after the death of her mother, Mary Yellan, age 23, has nowhere to go but to live with her aunt Patience, whom she hasn't seen in years.  Aunt Patience is now married and living in Cornwall at the Jamaica Inn, with her husband, the proprietor.  On her way to her new home, Mary dismisses the warnings of the coachman, who tells her it's an evil place and she needs to run away as fast as she can.  Instead Mary moves into the creepy inn, which has no guests, just her scary uncle, her terrified aunt, and whispers of evil comings and goings.  She's surrounded by the moors with no one else for miles around.  Terror awaits!

Anyhow, Jamaica Inn  is not a bodice-ripper, but the with combination of the purple cover with the pink title, plus the mass-market size, I was ready to be unimpressed. (And the Jamaica Inn is NOT on the edge of a cliff, as in the cover). I so wanted to be wrong, and that this would be as wonderful as Rebecca, which is one of my favorites.  Mysterious men!  A fabulous mansion!  The creepy housekeeper!  What is not to love about Rebecca -- which is actually a beautifully written novel?

Sadly, this just isn't on the same level.  It's melodramatic and predictable, and there are waaaay too many descriptions of the creepy moors.  If you don't like a lot of descriptions of scenery, you might want to skip this one, though they are quite well written.  Here's a good example from the beginning of the book:

Strange winds blew from nowhere; they crept along the surface of the grass, and the grass shivered; they breathed upon the little pools of rain in the hollowed stones, and the pools rippled.  Sometimes the wind shouted and cried, and the cry echoed in the crevices, and moaned, and was lost again.  There was a silence on the tors that belonged to another age; an age that is past and vanished as though it had never been, an age when men did not exist, but pagan footsteps trod upon the hills.  And there was a stillness in the air, and a stranger, older peace, that was not the peace of God.

This is one of du Maurier's earlier novels, but it was written only two years before my beloved Rebecca -- is it fair to compare them?  Rebecca  is reminiscent of Jane Eyre, which I also love (some say it is a reworking) -- and now that I think about it, Jamaica Inn  does remind me a little bit of Wuthering Heights, which I really disliked. . . I suppose it's all the talk about the moors.  One character is a little like Heathcliff, but Mary Yellan is a whole lot spunkier than Cathy, whom I just wanted to smack.  Mary does some stupid things in this novel, and I knew who the villain was right away.  The ending was no surprise either.

At any rate, I'm not giving up on du Maurier yet.  Besides Rebecca, du Maurier wrote some outstanding creepy short stories -- I highly recommend Don't Look Now, one of her short story collections.  It contains The Birds, which is apparently quite different from the movie, which was adapted into a movie starring Donald Sutherland and Julie Christie back in the 1970s.  It's set in Venice and it's really creepy.  Skip Jamaica Inn and read that one instead.
Posted by Karen K. at 10:37 PM