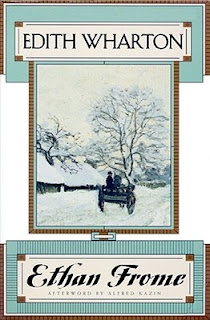 Here is a book that many people hate, and yet, it is one of my favorite books of all time.  Sadly, the people who hate this book were most likely forced to read it in high school.  I often bemoan the fact that I came to love many classics later in life, but I've also come to realize that if I had read this in high school English, it's quite likely I would have hated it as well (probably because the American Authors teacher was a terror; I took World Lit because I'd had that teacher for composition sophomore year and really liked him).  At any rate, I was happy reading Candide and 1984 (though The Mill on the Floss was a BIG mistake on my part) and my friends were suffering through The Scarlet Letter.

Nevertheless, I finally found Edith Wharton about seven years ago.  I read The Age of Innocence while on vacation in the Florida panhandle, but somehow, it didn't do much for me.   I really didn't get how wonderful Edith Wharton was until I read House of Mirth about a year later, which I could hardly put down.  Soon after I read Ethan Frome in a single sitting, and I've loved it ever since.  Since then I've enjoyed more Wharton, a writer who can write both heartbreaking novels, ghost stories, and wry and witty short stories -- if you don't believe me, just Google "Xingu" and try to read it without cracking a smile.

But, back to Ethan Frome.  If you don't know the story, basically, it is about a young man trapped in terrible circumstances.  (If you haven't read Wharton, this is pretty much the theme of her entire oeuvre.)  Told with a framing device, in flashback and conjecture, we learn that when Ethan was in his late 20s, he was trapped in a marriage with an older woman, Zenobia, a shrewish hypochondriac.  To help out, Zeena's distant cousin, Mattie Silver, had come to live with them, and Ethan is in love with her.  Once Ethan had a promising future as an engineer or scientist, but he's saddled with debts on a farm he can't sell, and now there's really no way out for him and Mattie.  Over the course of a few days, his life takes a tragic and ironic turn. 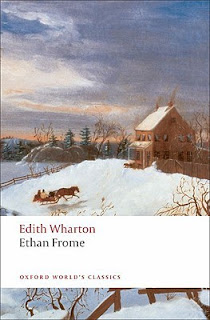 I chose this book for the January read for one of our book groups, and I think it was a good choice.  It's a short read, about 150 pages in most editions, and there's so much to discuss -- loaded with symbolism and great characterization.  Also, Wharton is just masterful at setting the scene.  I live in south Texas where we rarely get a hard freeze, much less a dusting of snow, and I just felt freezing cold while reading this book.  It brought back a lot of memories of winters I've spent in the Midwest -- about ten years ago we were stationed in Nebraska, and this story could have easily been relocated to the bleak, windy prairies.

I love Ethan Frome, but it always makes me wonder why I'm so attracted to it.  What does it say about me, if I love Wharton -- her stories are so tragic!   She does tend to write variations on the same story over and over, but she does it so well.  I've read about about seven of her novels, and I've loved most of them.  Sadly, I can only think of one that has a happy ending -- and that was her unfinished novel, The Buccaneers, which was finished by another author based on Wharton's notes.

I still have Twilight Sleep and The Glimpses of the Moon on the TBR shelves, plus The New York Stories of Edith Wharton, an NYRB Classic.  I want to read at least one of these this year.   There's a chance I may even get to visit Wharton's estate, The Mount, in the Berkshires this summer -- but that's still in the planning stages.

So, who else is a fan of Edith Wharton?  Do you love Ethan Frome, or hate it?  And has anyone been to The Mount?

This is the first book I've completed for the Back to the Classics 2013 Challenge.
Posted by Karen K. at 12:00 PM