The Last Chronicle of Barset by Anthony Trollope 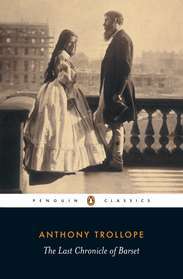 (Edited to remove a possible spoiler)

At last, I have finished; I have completed all six novels of the Barsetshire Chronicles!  It's more than 3,000 pages, more if you count the introductions and endnotes!!  I started back in 2009, but I really hit my stride last year, finishing Doctor Thorne, Framley Parsonage, and The Small House at Allington.  I started The Last Chronicle of Barset the day after Christmas and read it in bits and pieces for the past month.

If you're a Trollope reader, this is the book that ties up all the loose ends in Barsetshire.  Nearly every major character from the previous five books makes an appearance, from the first book to the last, and some new characters as well.  The reader sees how all the characters fit in together in the world of Barset, especially among the clergy (though I never could remember the difference between the dean, the bishop, and the archbishop.  Oh well).

Basically, the story starts out with a scandal, a mystery that brings all the characters together.  Reverend Crawley, a minor character from Framley Parsonage, has been accused of stealing a check for 20 pounds to pay his butcher's bill.  He refuses to get legal help and is arrested for theft.  Barsetshire is abuzz with the news, and people take sides, many of them jumping to conclusions long before the trial.  (I'm talking about you, Mrs. Proudie!)

This is further complicated by the fact that his eldest daughter Grace is the love interest of Henry Grantly, son of the Archdeacon, and grandson of Mr. Harding, the main character of The Warden.  The archbishop won't hear of his son marrying her while her father is under a cloud of suspicion, causing friction in the family;  meanwhile, we learn the fate of Johnny Eames, and many of the other Barset characters, including Dr. Thorne, Miss Dunstable, and the wicked witch of Barset, Mrs. Proudie.  The only character I really missed was the oily Obadiah Slope of Barchester Towers, who, sadly, makes no appearance.  And a few new characters are thrown in as well, just to thicken the plot. 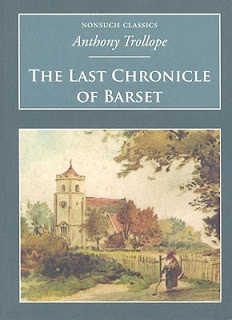 I really liked this book and the way it tied up all the loose ends of Barsetshire.  However, I did feel sometimes that it was dragging on too long.  It's nearly 900 pages!  Honestly, the story of Josiah Crawley could have been trimmed a bit -- pages and pages are devoted to the fact that he won't come to his own defense and hire a lawyer because he's a little too ethereal to bother himself with everyday problems like paying bills.  I also thought some of the side stories were a little unnecessary.  And I still wanted to strangle Lily Dale. (Highlight if you want to know the answer).

Nevertheless, this is a really satisfying ending to the series.  I'm quite proud to have finished it -- now on to the Pallisers, another six-volume series, this one with a more political angle.  I'm sad to be leaving Barchester but I look forward to reading more Trollope.  I'll probably try and read a couple of the stand-alone novels before I tackle another series of Victorian triple-deckers.

I have another 40 novels by Anthony Trollope to enjoy!!  Any suggestions?  So far, the only one I've read (besides the Barset novels) is The Way We Live Now, which I absolutely loved.  Which of Trollope's stand-alone novels are the best?
Posted by Karen K. at 8:38 PM