Go Tell it On the Mountain by James Baldwin 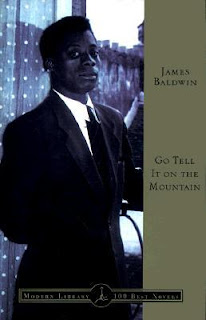 Go Tell it On the Mountain has probably been on my to-read list since 2005, since I discovered The Modern Library 100 Best Novels list.  (I've now read 48 of them.)  Along with Native Son and The Invisible Man, this novel is one of the classics of African-American fiction.

This is a short book, about 250 pages in most editions.  Basically, this is a semi-autobiographical story based on Baldwin's early life.  It's centered around a day in the life of John Grimes, on his 14th birthday.  It's 1935 and he's growing up in Harlem,  where he lives with his parents, baby sister, and younger brother Royal.  His father Gabriel is a preacher, and everyone thinks he'll grow up in his father's footsteps.  He and his father have a difficult relationship, because his father favors his younger, wilder brother.

The story deals with John's spiritual and sexual awakening, and flashes back to his parents, Gabriel and Elizabeth, and his aunt Florence, and how they moved north from their life of poverty in the Deep South.  It's not overtly about racial conflict, but racism plays a big part in their situation and how it shapes their lives.  There's a lot of religion in the novel, but it's also about family dynamics.

Go Tell it On the Mountain was an easier read for me than Native Son, which has some really unpleasant characters doing horrible things, but I don't think Baldwin was trying to make a big social statement like Richard Wright.  I think it's really just a snapshot, a look into people's lives.  I'm not a religious person, so I'll admit that those parts of the book really didn't speak to me and I ended up skimming them somewhat.  What I was really interested in was the family histories, the role of the female characters, and how hard it was for African-Americans at that time.  The characters are really well-developed and I found them very realistic.

This book was the monthly selection for the library's classic book group, and though not everyone had managed to finish the book, we had a really good discussion about religion and how writers portray it in modern novels versus older book.  I'd still like to read Ralph Ellison's Invisible Man, though I'm a little intimidated by it, because of the length and the subject matter.

Have any of you read Go Tell it On the Mountain?  How about Invisible Man?

This is the second book I've completed for the Back to the Classics Challenge 2013.
Posted by Karen K. at 3:04 PM