I know, this isn't a food blog.  Originally, when I started the blog more than four years ago, I did post a few recipes and the occasional photo of food I'd eaten in restaurants, but 99% of my postings have been book-related.  Today I am making an exception because last week, November 15 it was National Bundt Day.  (Really.  It's a thing.)

Anyway, about a year ago, I became obsessed with bundt cake after finding this amazing blog:  The Food Librarian, created by Mary, an amazing baker and librarian in California.  Like myself, she likes cake and doesn't care much for frosting; hence, the bundts.  And who can resist all those pretty pans?

Almost every year, Mary celebrates November by baking bundts, sometimes, a different one every single day.  This year, she's giving a way a new bundt pan to anyone who posts about a bundt they made -- and how could I resist?  So Monday morning I made this cake and brought it to work: 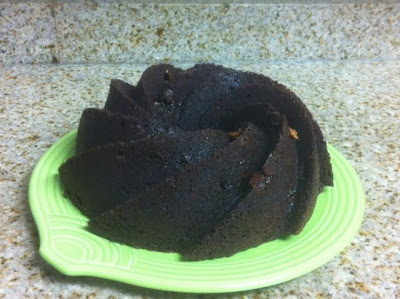 This is a Malted Milk Chocolate Cake from the Beekman 1802 Heritage Dessert Cookbook by Josh Kilmer-Purcell and Brent Ridge (also known as the Beekman Boys, goat farmers and winners of last year's Amazing Race).  I love chocolate and I love malted milk balls, so I thought this would be a fun recipe to try.  The original recipe called for a 9 x 13 baking pan, but I thought it would make a fun bundt.  (Those lumps on the cake are bits of chopped malted milk balls). 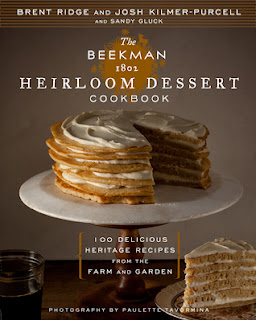 Well, yes and no.  At first I was going to bake it in my largest 12-cup bundt pan, which is stoneware, then I realized it would never be finished in time for me to get to work.  I pulled it out of the oven after just a minute and scraped most of the batter into the smaller 10-inch Heritage bundt pan; the rest I baked into a teeny 3-cup bundt pan.  (I left this for my kids to eat since I was taking the larger bundt to work).  Well, it was nearly a disaster -- the batter puffed up and overflowed from the small bundt and burned all over the bottom of the oven.  The recipe calls for 2 teaspoons of baking powder and 1 teaspoon of baking soda, which is a LOT -- I was worried that it was a printing error and that the whole thing would be a disaster.  And that I would be late to work.

Well, fifteen minutes before I had to leave, I checked the cakes again, and they were both finished (the small one should have been done much quicker, which was odd).  I pulled them from the oven and they were cooled enough to turn out of the pans with five minutes to spare before I jumped in the car with my beautiful warm cake.  It was delicious, rich and chocolatey with little chunks of malted milk balls.   Now everyone at work thinks I am a hero because I brought warm chocolate cake.  There was barely a scrap left by the end of the day.

So thanks, Mary, for inspiring me to make this cake, and thank you Beekman Boys for your beautiful new cookbook!  I'll be back to blogging about books next time.
Posted by Karen K. at 10:25 AM