The Duchess by Amanda Foreman 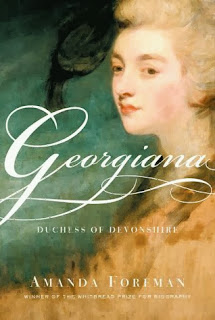 After completing Wild Swans, I was inspired to tackle more nonfiction (specifically, book #11 for the TBR Pile Challenge.)  I'd seen the movie adaptation of The Duchess a couple of years ago, but never got around to reading the book which I'd picked up for a paltry $1 at the library Friends sale.  It was also one of the reading selections from our Jane Austen book group that I never read.

Anyhow, once I finally started reading this, I quite liked it.  Georgiana was a really interesting woman.  I mostly think of 17th century women as standing around in giant dresses with enormous powdered wigs, but she was actually a political powerhouse.  Georgiana Spencer (great-great-I-forgot-how-many-times-great aunt of Lady Diana Spencer, yes, THAT Diana Spencer) was 17 when she married the Duke of Devonshire, uniting two rich and powerful British families in the late 1700s.  Most of what I know about 18th century history is about the American Revolution; this book is about what was happening politically on the other side of the Atlantic around that time.  Her marriage to the Duke was troubled, yet she became involved in politics and was incredibly influential with the Whig party.  She was also a close confidante of famous politicians like James Fox and the Prince Regent (and all you Jane Austen fans know exactly who that is).

Of course this book talks about Georgiana's difficult marriage and home life, and her complicated relationship with the Duke, and her best friend Elizabeth Foster, who lived with them for years and  was also her husband's off and on mistress!  Complicated is putting it mildly.  However, there was much more politics than I was expecting.  I liked it but I did have trouble sometimes keeping all the politicians straight. 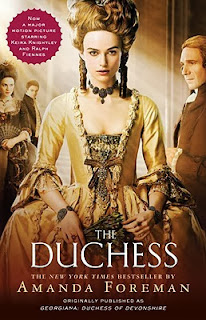 And to make matters even worse, Georgiana had a serious gambling problem.  Gambling was to the rich as gin was to the poor, the book notes.  She racked up seriously jaw-dropping debts, literally millions in today's dollars.   Plus she had at least one lover and illegitimate child, and the story there is really heart-breaking.  Not really a role model, but a very complicated and interesting woman.

So -- I've now completed eleven of the twelve books for my TBR Pile Challenge!  I have three left on my original pile (since I also read my two optional books already).   How's everyone else doing with this challenge?  Have you finished, or are you close to completing it?  Which books have you liked best?
Posted by Karen K. at 7:50 AM