The Conquest of Plassans by Emile Zola 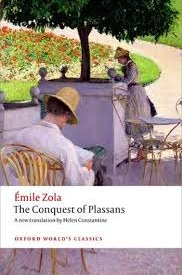 I'm getting near the end of the Back to the Classics Challenge and I'm much farther behind than I planned. The other day I was looking for a good short book and I decided it was time to read something in translation. It had been more than two years since I read anything by Emile Zola so I chose The Conquest of Plassans -- partly because it was short; partly because it was French; and partly because I loved the cover (and I've actually seen the original painting from that edition, The Orange Trees by Gustave Caillebotte. It's at the Museum of Fine Arts in Houston).

So. Set in the provincial town of Plassans in Provence, this is the story of Abbe Faujus, a mysterious clergyman who arrives in town with his mother and rents rooms from the Mouret family. Monsieur Francois Mouret is related to the Maquarts, and his wife, Marthe, was a Rougon. There are a lot of gossipy characters with nothing much to do other than speculate about the lives of their neighbors. Somehow Abbe Faujus manages to say very little about himself and yet others start talking to him and spill all kinds of secrets.

Eventually Faujus is able to gain the trust of the townspeople and local church hierarchy. He begins to claw his way to the top politically and socially and gain power over many of the locals, some of whom don't appreciate his influence. In particular, Francois Mouret becomes jealous and suspicious regarding the influence Faujus has over his wife Marthe, who becomes incredibly pious and obsessed with religion.

Meanwhile, Faujus shady sister Olympe and her ne'er-do-well husband also arrive in town and threaten to expose all kinds of family secrets. They ingratiate themselves in the Mouret household which doesn't bode well. This being a Zola novel, a lot of these characters are basically train wrecks.

The Conquest of Plassans is the fourth in Zola's Rougon-Macquart cycle, and the eleventh of the series I've read so far. Normally I tend to read series books in order, but when I started reading Zola about five years ago, some of the earliest books in the series weren't available in good English translations. (Luckily, Oxford World's Classics has been publishing excellent translations, like the one  I read). I'd heard that most of the books are really stand-alone novels that are loosely linked.

I'd already read the second and third novels, which are set in Paris, but this novel is set in Plassans, which is also the setting of the very first novel in the series. There are a lot of references to events from the first book especially in the endnotes. If you don't want any spoilers for the first novel, I would definitely recommend reading it before you read this one -- I was really regretting not having read The Fortunes of the Rougons first, especially since my library in Texas owned a copy. But buying a copy of the first book from Amazon didn't seem practical since the mail takes longer now that I'm overseas.

This book was OK but it won't rank with my favorites in the Rougon-Macquart series. I think some of his later books are really better. This one felt like it was kind of all over the place plot-wise. There's a whole sub-plot about political intrigues that basically went over my head, and I don't know if I just wasn't paying close enough attention, or if I should have done more research about the Second Empire, but either way I found it confusing. In general, I thought the drama centered around the families was the strongest part of the book, but I tend to enjoy stories about domestic life.  I also didn't like the way most of the female characters were portrayed. To be fair, the male characters were also awful, and Zola is a product of his time, but a couple of the women's portrayals were pretty sexist and made me really uncomfortable.

I think in a way I put off reading this book because my last experience with Zola was not great -- a lot of people love Nana, but I really disliked it and it kind of put me off Zola for a while. I'd read ten of his books and I think I was worried that I'd read all the good ones already and the rest would be disappointing. Maybe there's a reason that some of Zola's novels don't have many good English translations. And in general, is it better to read an author's best work first, or should you save it for last? Bloggers, what do you think?

I'm counting this as my Classic in Translation for the Back to the Classics Challenge.
Posted by Karen K. at 5:05 AM