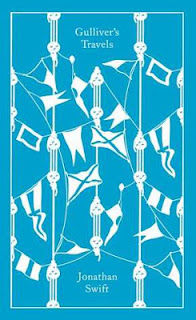 I don't know WHAT I was thinking when I came up with the Classic Published before 1800 category for the Back to the Classics Challenge last year. Give me a long-winded Victorian triple-decker and I'll devour it, but any time the publication predates 1800, it is a real struggle. Years ago I read Shakespeare in college for a literature credit, and liked it, and I truly enjoyed Candide, but this category was a real struggle for me. I originally meant to read Jane Austen's Love and Freindship (sic). JA is possibly my all-time favorite author and I still couldn't get into it. But I did own a beautiful Penguin Deluxe Hardcover Classic of Gulliver's Travels, published in 1726! Not a woman author, but a book from my own shelves -- plus, it's not too long, a bonus in December!

So. All I knew about Gulliver was that he was shipwrecked and wound up in Lilliput, where everyone is about four inches tall. There are images everywhere of Gulliver tied down by tiny people, so this was not a surprise. But I was surprised to learn that Gulliver is his last name (his first name is Lemuel). 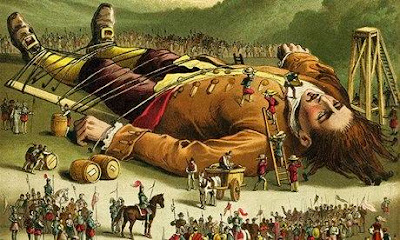 Gulliver  quickly learns the language and eventually wins the trust of the people. In one memorable anecdote, he even saves the tiny palace while it is engulfed in flames, using, um, a very practical if questionable method. 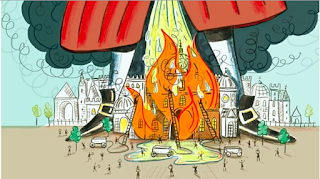 Yes, Swift doesn't shy away from describing how Gulliver copes with the day-to-day issues of life as a giant. (I found this surprising but I admit I did wonder about how the Lilliputians would feed him).

However, I didn't realize Gulliver's stay in Lilliput is only about a quarter of the book. Things eventually take a turn for the worse in Lilliput, and eventually, Gulliver makes his way back home to England. And I figured from the title that he had some more journeys, but seriously, though, wouldn't you have learned your lesson after the first shipwreck? Better to stay home. His wife must have been most displeased.

His second voyage leaves him stranded in the land of Brobdingnag, where Gulliver has the exact opposite problem -- now he's the tiny one, in a land of giants! It's interesting to see Gulliver experience life from the Lilliputian perspective, and I think this was my favorite part of the book. He's basically a moneymaker for the family that find him and care for him, until he makes his way to court and becomes a plaything for the Queen until circumstances return him back to England.

Again, you'd think he'd stay off ships. But nope, back he goes again in Part III, visiting the strange lands of Laputa, Balnibari and . . . Japan! (This was rather disappointing, as I've actually lived there. Gulliver doesn't find it particularly strange, though they ask him to renounce his Christian beliefs and "trample on the crucifix." I don't think Swift actually ever went there.)

Despite his vows never to leave England, he makes one last journey, and the ship is overtaken by pirates who dump him in the land of Eventually, he makes his way to the land of the Houyhnhnms, a race of intelligent talking horses who are served by the sub-human Yahoos. He lives quite happily there for years as the only intelligent Yahoo, until forced to return home to his disappointment.

Overall I mostly liked this book but I did find the third section really dragged, mostly because it was a lot of politics and satire, and I'm not that familiar with that era of history and philosophy. I do prefer everyday life, which is why I liked the first half better.  I did quite like the final section where he lives with the intelligent horses. And I do always find it a little jarring when a book is published in the original 18th century Style in which all Nouns are Capitalized. (Fun fact: this is still the correct writing style in Germany, though my German is very poor so it's really not an issue).

Anyway, I'm glad to have finally read this -- and I probably won't be including this category in the Back to the Classics again!
Posted by Karen K. at 4:33 AM