The 1977 Club: Quartet in Autumn by Barbara Pym 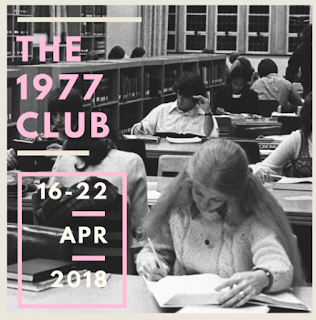 . . . she still kept to her rules -- one did not drink sherry before the evening, just as one did not read a novel in the morning, this last being a left-over dictum of a headmistress of forty years ago.

The 1970s is kind of a dead zone for my reading -- I was pretty young back then and I hadn't really read any adult novels written in that decade except some fairly trashy mainstream books when I reached high school (Stephen King, the John Jakes historical novels, and dare I say it, some Danielle Steel!) When Simon announced that next readalong was The 1977 Club, my heart sank a little -- I was afraid I'd end up reading Jonathan Livingston Seagull (wrong year!) or something by John Le Carre.

I was delighted to realize that one of my favorite authors, Barbara Pym, had published a novel in 1977 -- and it was sitting on my shelves unread! Eureka -- my choice was made, Quartet in Autumn. 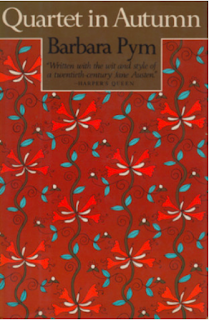 The book -- a novella, really, at just 218 pages -- follows approximately a year in the life of four co-workers, most likely aged in their late fifties or early sixties. Letty, Marcia, Norman, and Edwin all work together at an amorphous office, where their work is never really defined. None of them are exactly friends, but what they have in common is that each of them is essentially alone. Edwin is a widower and spends a lot of time with vicar and his church; Norman lives in a bed-sit and has brother-in-law, his late sister's husband; Letty has a friend in the country, Marjorie, and they plan to retire together to Marjorie's cottage; and Marcia, a breast-cancer survivor, seems to have nobody since her cat Snowball died. The only thing she seems to look forward to is her regular check-ups.

There isn't really much of a plot in this book, just vignettes about the characters and their interactions.  You couldn't describe the four as friends, and after Marcia and Letty retire, there's a very awkward lunch reunion for the four of them. Yet, they're somehow connected -- I suppose these four are almost like a vague sort of family.

This is rather different than the other Pym novels I've read, in that the characters are all much older than the usual protagonists in Pym's novels, and there isn't really a romantic element plot among any of the main characters. It's rather bittersweet compared to some of the earlier novels I remember. Quartet in Autumn was the first novel Pym published since 1961 when No Fond Return of Love was published; her published dropped her after that novel and she was rejected by other publishers. She was rediscovered in 1977 after two influential writers named her "the most underrated writer of the 20th century" in the Times Literary Supplement. Quartet in Autumn was shortlisted for the Booker Prize, and Pym was able to publish two more novels before she died in 1980. (Several of her unpublished works were published posthumously.

I did like this book but it took a little while to warm up to the characters. The story didn't really grab me right away but the characters were really well drawn, though the plot is a little sad. It does rather make sense given the circumstances regarding Pym's publishing career, and the fact that she did die of breast cancer just three years after this book was published.


I have just one more of Pym's novels unread, A Few Green Leaves, and I also a copy of A Very Private Eye, a collection of her diaries, letters, and notebooks. I'm very happy to have completed this one for the 1977 Club. Thanks again to Simon and Kaggsy for organizing it!
Posted by Karen K. at 4:53 PM