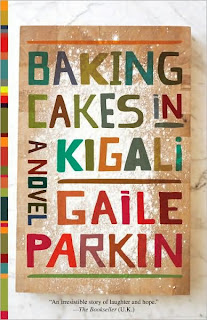 Warning:  I know a lot of people loved this book, but sadly, I wasn't one of them.  If you are, feel free to skip this review.  For an opposing view, see Amanda's review here.

To me, this book has all the trappings of a book group fad:  a quirky African lady meets people from all walks of life due to her little business and solves all their problems.  Sound familiar?  That's because it's been done before, and actually done well. It's probably wrong of me to compare this to another book, but I think it's inevitable -- this is undoubtedly going to be compared to the far superior No. 1 Ladies Detective Agency by Alexander McCall Smith.   Both books are about busybody African ladies of a certain age and certain size, and both are fairly short books.  But that's where the comparison ends.  I found this book a poor copy of that charming series; it's didactic, preachy, contrived, and frankly, the writing isn't that good.  This book was a huge disappointment from the first chapter.

McCall Smith has written ten books in his series about Botswana, and though they're starting to feel repetetive, they're still warmhearted and appealing.  His characters are well-developed, his descriptions of the everyday life of Africans seem realistic (since, sadly, I've never visited), yet he's able to include subtle messages about African problems without using the sledgehammer approach.  Kigali, on the other hand, is less than subtle.  Our angel, Angel, the baker in the title, segues from a sales pitch about her fantastic cakes to lecturing an Ambassador's wife about the official denial of AIDS in Tanzania on page 9!  It's so heavy-handed and obvious:  "This book has an important message.  Things in Africa are bad!!"  Well, duh.  But of course, Angel is quickly able to make this woman see the light.  Uh huh.

Even her name is sort of a McCall Smith ripoff.  His character is called Precious (which is both endearing and ironic, since her first husband beat the crap out of her), Parkin's is Angel -- is she the selfless Angel of Kigali, sort of like Mother Teresa?  I will admit, this may be common in Africa.  But it comes off as cutesy and annoying here.  Before the third chapter she's convinced her landlord to change the water bill of two feminist volunteer workers in the building, who were massively overcharged because they're considered Wazungu, rich white foreigners, and convinced a woman to change her infant girl's name from Goodenough (parents disappointed because she wasn't a boy) to Perfect.

However, Angel, she supports a couple's decision to marry and spends an awful lot of time planning their wedding and raising money for said couple -- despite the fact that the husband doesn't decide to marry the bride until his other girlfriend gives birth -- and finds out if the new baby is a boy or a girl.  [SPOILER ALERT!!] See, the first girlfriend, who runs the convenience store, had his first child, and it's a boy, so she's already ahead.  The writer mentions that it's sort of unfair to celebrate this union because of the disadvantage of the second monther, but pretty quickly she's forgotten -- besides, the chosen wife is from a rival tribe, so it's all about overcoming prejudice.  What about the prejudice the unwed mother and this fatherless baby girl will face for years?  Too bad, so sad.  Angel arranges an enormous cross-cultural shindig and involves all the other characters. The first couple are going to be in the papers!!

And I was really annoyed by a little anecdote about a dentist. [Disclosure:  my husband is a dentist, so I'm a little sensitive about how they're portrayed in the media.  Ignore your teeth, and they'll go away.  Okay, back to the story].  In chapter 8, Angel takes her grandson to the dentist.  Excellent, great to hear that they have dental care in this war-torn country.  However, as a reward, she buys him a soda -- immediately after the omniscient narrator explains that the dentist lectured her about feeding the grandchildren sweets.  See, Angel doesn't necessarily believe him, because after all, he's from some island far away, and because he's a Seventh Day Adventist.  So, if you don't agree with someone's religion, you should ignore his/her medical advice.  So why is she paying her hard-earned money to go to this dentist in the first place??!!?

Besides this hypocritical annoyance -- since this book is all about tolerance and how all races and religions should tolerate each other -- this books crams too many characters in too fast, many of whom never show up again, and I just didn't buy the story of how this Tanzanian woman is in Rwanda baking cakes fancy cakes for people, despite being surrounded by poverty and unreliable utilities.  The appeal of McCall Smith's books are the slices of life of the Botswana native, and most of the characters in this book are expats that just aren't that interesting.  And the explanation of how she's able to procure supplies to make sophisticated cakes is a pretty contrived.  Plus, Angel keeps repeating the same tragic back story about her family's losses over and over.  The author crams in tragedy after tragedy -- there are so many, I won't even list them.  I'm not trying to belittle the pain and horrors of Africa, believe me.  I see enough of it on the news.  But trying to package them as a charming book isn't going to help Africans.  "Charming" and "genocide" just don't belong in the same paragraph.  I'm not saying readers shouldn't learn about some of the horrible things that have happened there.  I just don't think you can mix the two successfully.  There are plenty of books about the Holocaust and they sell like crazy, but nobody ever tries to package them as charming.

Overall, I get the impression that this author, inspired by Mcall Smith's literary success (and HBO series), thought, "Hey! I lived in Africa! I can write a book about it, and get rich, too! I'll just change the main character to a woman who bakes cakes. . . and change the setting to Rwanda, so I can add all kinds of political stuff and teach oblivious Americans to pay attention to Africa! And I'll write lots of sequels and get a movie deal, too! Easy-peasy!" Or else someone at Random House thought so, and went out and found an author in Africa to compete with McCall Smith. Either way, it's pretty annoying. I really hope I don't see this as The Next Big Book Group Selection.
Posted by Karen K. at 3:12 PM