A Girl of the Limberlost 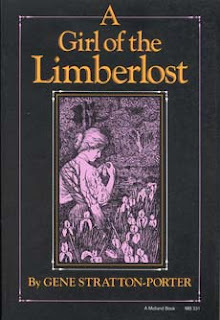 Since I'm always on the lookout for an overlooked classic, I was eager to read this book.  It came highly recommended by a friend (the same one who was shocked I'd never heard of E. Nesbit) and it was mentioned in the introduction of my new favorite, Daddy Long-Legs.  But again, it's not nearly as widely read as great coming-of-age stories like A Tree Grows in Brooklyn (which I also love). However, that suggests a question -- can it be considered a classic if it's not widely read?  And why isn't anyone reading it anymore?  In this case, I think there's a pretty good reason.  This book started out with such promise and ended so disappointingly -- with a whimper, you might say.

The setup:  set in the early 1900s, teenaged Elnora has grown up in the Indiana countryside, on the edge of the Limberlost Swamp -- a virtual nature preserve.  It's her first day of high school in the big city, and of course, she's dressed all wrong, has no friends, and no money for the books and tuition which she owes because she lives outside the district.  Her grumpy, distant mother is unsupportive, and had hoped Elnora would quickly be discouraged from such upstart notions and stay on the farm where she belongs, since there is no ready cash to pay for such foolishness.  Though her widowed mother owns acres of land with valuable trees, she's clinging to it, symbolizing her lost love for Elnora's dead father, who perished in the swamp when she was an infant.  They're so cash-poor they can't afford the taxes, much less school.

But hark!  Elnora can pay her own way -- the Bird Lady, (a local botanist/collector of moths and other flora, fauna, and historic artifacts) will pay good money for the treasures that our heroine can collect from the swamp. So it looks like Elnora will spend the rest of the nearly 500 pages learning about life and love from her benevolent naturalist patroness, and somehow reconnect with her embittered mother, possibly learning more about the story of her lost father.  All will end well.  Right?

But sadly, this story sort of went downhill about halfway through. [WARNING: SPOILERS AHEAD!] Quite a few plot developments are just waaaay too convenient.  Elnora and her mother reconcile seemingly overnight, characters like the beloved neighbor couple and an orphan boy essentially disappear, and the second half of the book is dominated by a plot about Elnora's true love and his evil fiancee, which drags on forever.  Finally, Elnora is aided by some friendly characters who were mysteriously mentioned earlier but never explained.  When Elnora first starts collecting moths etc. for cash, she refers to someone called Freckles, without any explanation or backstory.  Later, the Bird Lady suddenly refers to someone called Swamp Angel.  Who the heck are these people?  It turns out A Girl of the Limberlost is actually a sequel to another book called -- wait for it -- Freckles. There is no mention of this previous volume on the book jacket, and none of the characters are included in the list that precedes the first chapter. Yet, [SPOILER!!!] Elnora suddenly takes off from Indiana, take a train ALONE to Michigan, and goes to meet these people -- complete strangers -- in chapter 23!!  Who, of course welcome her with open arms.  Riiiight.

It also really annoyed me that this is sort of two stories in one, a detailed story setting up Elnora and all the hardships she's going to overcome, then, without minimal transition, the book just jumps forward in time three years to set up the scenario in which she meets her true love Philip. Seriously, the book reads,

So the first year went, and the second and third were a repetition; but the fourth was different, for that was the close of the course, ending with graduation and all in attendant ceremonies and expenses."

Hold the phone, what happened in those three years?   Not one thing worth mentioning the rest of her high school career -- up until the point at which Elnora is valedictorian and a star musician.  How convenient!  It's as though the author had some really good ideas about the setup of the character, and a couple of major events in her life, but couldn't take the time to expand the rest of her life. Doesn't she have a single sweetheart in high school?  A nasty teacher?  Doesn't her character develop at all in those years, or the relationship with her mother?  And some foreshadowed events never take place -- in the beginning, there's a whole setup about how dangerous the Limberlost is at night, full of robbers, bandits, etc., and it appears in the first couple of chapters that Elnora's being stalked -- yet, there's no payoff as these characters and plot elements simply disappear.  Ooops!  Forgot about that, never mind.

The ending of this book digressed so much that I stopped reading it with less than 20 pages to go.  Seriously, I put the book down and did not care how it ended.  I finally picked it up again last night so I could force myself to finish it --  frankly, I just didn't care any more, but I didn't see how I could post a review without actually finishing it.   And, sadly, the ending is just horrible, unbelievable and preachy.

The final message of this book (which is about as subtle as a sledgehammer): "Everyone should be just like Elnora, who is perfect!"  I honestly don't think she had a single flaw.  In retrospect, I wonder how I made it through this book.  I did like the first half; I was really rooting for her, and it's not a difficult read.  I got through a lot of it on an airplane (it was just easier than rooting around in my carryon for another book) and in the shuttle to my hotel.

Would I have liked it when I was fourteen?  I guess parts of it are a little romantic, since Elnora is a sort of a Cinderella figure.  But aside from the structural flaws (which I probably wouldn't have noticed as a YA), the writing is pretty stilted, it's sentimental, and really preachy. I'm really not surprised nobody reads this book any more.
Posted by Karen K. at 1:27 PM