The Enchanted Castle by E. Nesbit 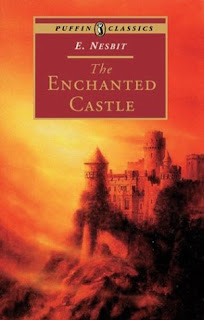 I've never been a fan of the adult fantasy genre, but for some reason, I am still drawn to juvenile works. I adored fantasy books when I was a kid -- Roald Dahl, C. S. Lewis, Diana Wynne Jones, Madeline L'Engle, L. Frank Baum, I still love all of them. But somehow I have never found the appeal of adult fantasy unless it's somehow rooted in our world, like Anansi Boys (one of my all-time favorites.) Maybe it's only the child in me that has an imagination and can still appreciate it. I still love children's fantasy, new and old.


This is the second Nesbit work I've read (the first was Five Children and It, which also has a decent movie adaptation). The Enchanted Castle, first published in 1907, is about three children, Gerald, Cathy, and Jimmy, who are forced to spend the entire summer holidays at Cathy's school because of contagious cousin at home. So, though not orphans, we have children running around unsupervised, getting into mischief with magic. They're out exploring one day and find a passageway that leads into a nearby manor home -- the eponymous castle -- and inside they find a sleeping girl whom they believe to be enchanted. She's really the housekeeper's niece, but they soon realize there is magic about, and hilarity ensues. People turn invisible, wishes are granted, statues come to life, and there's a subplot with long-lost lovers. Of course, it all turns out well in the end.


The interesting thing about Nesbit's books is that the magic always backfires -- basically, the children get their wishes, but it takes them awhile to figure out that sometimes what they wish for isn't what they really want. So in each adventure the children learn a little something, but not enough to keep them from messing about with magic. There's a lesson here, but it's not preachy.


I enjoyed this book, but I think it might be difficult for a child today -- Nesbit's writing style takes getting used to, and I think it might frustrate a child that's too impatient. Gore Vidal wrote an essay about Nesbit's work, and he thought that Nesbit wrote about children but not necessarily for children. [Vidal also wrote that "the librarians who dominate the "juvenile market" tend to be brisk tweedy ladies whose interests are mechanical rather than imaginative." Vidal wrote this essay in 1964, before I was born, and I'm guessing that was the last time a librarian wore tweed. Fellow librarians, please feel free to comment.]


Of course, Nesbit was writing a hundred years ago -- it's hard for me to guess what children liked a century ago, though it's my impression that they were treated more like small adults and were expected to grow up a whole lot quicker. Maybe they had longer attention spans, but they definitely had less choices when it came to children's lit.


Here's an example from chapter one:


Gerald could always make himself look interesting at a moment's notice, a very useful accomplishment in dealing with strange grown-ups. It was done by opening his grey eyes rather wide, allowing the corners of his mouth to droop, and assuming a gentle, pleading expression, resembling that of the late little Lord Fauntleroy -- who must, by the way, be quite old now, and an awful prig.


I think it's pretty funny and clever, but I don't know many eight- to eleven-year olds who would have the patience to read this book. My daughters are eight and twelve and [brag alert!] they're both extremely advanced readers. They did not have the patience for this book, even when I was reading it aloud and promised to skip ahead to the part with the magic ring. I'm glad I read this book, and I'm definitely going to read more Nesbit, but I think it would be a tough sell to the kids unless they're hardcore British fantasy lovers.
Posted by Karen K. at 5:03 PM