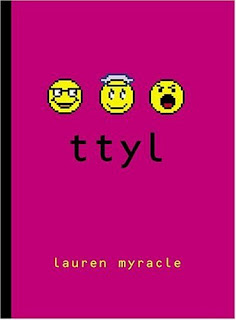 I was inspired by a display at my library to include TTYL by Lauren Myracle. All I knew about this book was that it was a book written in IMs (so I guess it's epistolary fiction) and that it must have offended someone at some point. Also, the author has written a series of juvenile books that my daughters enjoy (Eleven, Twelve, Thirteen); at some point, they're going to want to read another book by this author, so I thought I'd better check it out first.

A small note of explanation regarding banned books: many of the books found on banned books lists haven't actually been banned, just challenged, which is slightly different. Challenged means that someone has gotten his or her knickers in a twist about a book and complained about it to a library or school; banned means that the book has been successfully removed by said challengers. Many, many books are challenged unsuccessfully. And hooray to all the librarians, teachers, and school administrators for standing up for literary freedom. Frequently, the book-challengers have never even read the books in question. Should I be shocked? I know I shouldn't, but it never ceases to amaze me that people jump on the banned-books bandwagon without completing the entire literary work.

OK, rant over. Back to the review.

TTYL is the story of Zoe, Maddie, and Angela, three 10th graders in suburban Atlanta. The entire story is told in the form of Instant Messages. The book was published in 2002, but I'm sure if it had been written today it would have been all text messages or tweets, so it might have been even more difficult to read for an adult. I admit it, I am a texting snob. I do text, but I can't help it, I write in complete sentences, and I do punctuate and capitalize. Unless I'm being ironic. I did find it really irritating that these girls can have these long conversations but can't take the time to write out the word "you," "you're," and "night." Ironically, I read this book on National Punctuation Day.

However, if you can get past the grammar and IM-speak, this is actually a decent story. I did sometimes get the characters confused (the characters are differentiated by font and typeface color, which helped), but I was sucked into the story pretty quickly. Basically, the girls are dealing with the usual 10th grade stuff: cliques, crushes, strict parents, getting a driver's license. The girls are worried that their friendship will suffer from the usual growing-up high school angst. However, these girls have some serious problems that emerge: shy Zoe gets a lot of attention from an English teacher that attends her church, and things get a little nebulous. Maddie's new hip friend posts something really embarassing about her on the Internet -- these are real problems that could happen to a lot of kids, and teen readers should be aware of them.

I knew this book was banned/challenged because of the language and adult content, but some of it really did surprise me. In fairness, [mild spoiler alert!] the girls are just talking, no action. It really isn't any raunchier than most of the episodes of Sex and the City, but those characters are thirtysomething women, not teenagers. On the one hand, I'm well aware that teenagers talk like this all the time, so it's probably fairly realistic talk. I know teenagers are curious about sex, but some of it did make me pretty uncomfortable. It's a little icky.

Also, I do think that the sexual content of the book detracts from some good material about the more serious issues. Yes, the girls are somewhat stereotyped -- Angela is the pretty girl, Zoe is the good, religious girl, Maddie is the wild party animal -- but there are some topics included that parents should discuss with their kids.

Of course, this is probably just ironic because the parents who should discuss this stuff with their kids are the ones who aren't paying attention to what their children read anyway. Like the typical parents in most YA lit, the parents in this book seem to be clueless and uncaring; for example, there's a subplot about the girls planning a weekend camping trip virtually unsupervised. Who are these idiots? In this day and age when most parents won't let their kids walk to soccer practice unsupervised, how is it possible that they'd allow this? It is implied that Maddie's father has a drinking problem -- these are the parents that give their newly licensed daughter a car and let her drive around at all hours of the day and night. No wonder naked videos of this girl are posted on the Internet.

Basically, I'd really recommend this book for parents of teenagers to read -- they really need to be aware of what's going on with high schoolers, and talk with them about it. Maybe that's the underlying message that most librarians (and teachers, probably) want to pass on: pay attention to what your kids are reading, and why they're reading it. Don't stick your head in the sand and pretend that if you ban books like this, kids won't read them. Nothing will make a kid want to read something more than telling them that it's bad and that they shouldn't. I'd like to pretend that my twelve year old daughter won't want to read books like this, but she probably will. Hopefully when that time comes we can even talk about it.