The Diary of a Wimpy Kid (Series) by Jeff Kinney 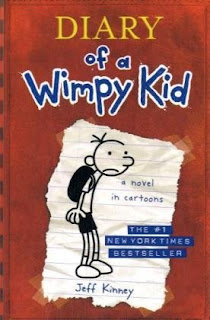 Meh.
That is my initial to response to this hugely popular children's series. I don't know what I was expecting, but, certainly, a little more. . . something. More humor? Better characters? This book left me mildly irritated at best.

Lately it seems like I can't escape this book. On a recent trip, my 12-year-old daughter bought the third book in this series and was laughing hysterically on the plane ride home (while I was engrossed in Dear Enemy). And this week when I volunteered at the school book fair, kids were buying the three volumes left and right, so I knew it was time to break down and try it. I started with the first book, then read the second and third in quick succession. It did not improve.

The plot in a nutshell: Middle-schooler Greg records his thoughts about life as wimpy middle-schooler and his home life as an under-appreciated middle child in a journal with cartoons. The cartoons are clever, sort of sophisticated stick figures, but not as witty as Fox Trot or as endearing as Calvin & Hobbes. The big turnoff for me is Greg's character -- the back of the book describes him as an "unlikely hero" but I found nothing heroic about him. He's really selfish, self-centered, and spends all his time trying to get out of homework, housework, or any kind of responsibility. He won't commit to any sports or hobbies other than video games. He only has one friend, Rowley, and he's really mean to him and is constantly taking advantage of him. I get the impression they're only friends because Rowley is somebody he can push around. I found the book pretty mean-spirited and there wasn't a single character I liked. There were only a couple of times through the three-volume series that I even snickered.

Since this book doesn't appeal to me in the least, I decided to consult my daughter. According to her, this book is funny because Greg does what she fantasizes about but would never do, like completing a four page paper by just typing four sentences in the biggest possible font, or not doing laundry for an entire year. Well, I guess it's good to know my daughter would never actually do these things.

This brought up another point with me: obviously, I'm NOT the target audience for this book, so, really, is it fair for an adult to critique a book meant for a child? Of course I can't appreciate this book the same way a ten-year-old would. I'm not a big fan of science fiction or sports books, so I can't see myself evaluating those either. But I suppose we can't have children evaluating all the children's books, or a lot of adult book reviewers who would be out a job.

I can see how this book would be great to get reluctant readers interested in reading, especially boys (though lots of girls like Wimpy Kid also). That's a big topic with librarians -- basically, just get them to read something. Then, hopefully you can get the kids to move to something a little more challenging. Maybe these books are a step up from Captain Underpants and the Goosebumps series. I just kept thinking there are lots of clever, funny books that aren't too hard. I love the Time Warp series by Jon Sciezska, and pretty much everything by Daniel Manus Pinkwater.

While I was reading this series, I couldn't help thinking about another book, The Absolutely True Diary of a Part-Time Indian by Sherman Alexie. It's also in diary form, with cartoon illustrations, and it is so wonderful on so many levels, but it's definitely for an older audience. It's one of the best YA books I've ever read. Another hilarious teen book in diary form is The Secret Diary of Adrian Mole, Aged 13 3/4, and its sequel, The Growing Pains of Adrian Mole, by Sue Townshend. The books are set in London and were published in the 1980s, but I reread them recently and they really have stood the test of time. They are laugh-out loud funny more than 20 years later.

I hope I don't sound like a literary snob (as you can see from my list of completed books, I read the entire Sookie Stackhouse series this summer!) I'm not saying kids should be expected to sit around reading only Newbery award winners and classics. The Wimpy Kid series is just the literary equivalent of a potato chip. Hopefully, the children who love these will move on to something a little more filling.