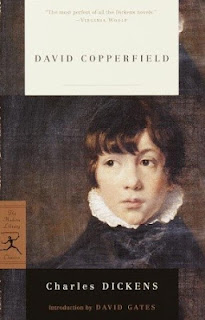 I finished this book last night, and I must admit, it was exhausting. I started this book back in July, and I kept getting distracted. I don't know if it's the longest book I've ever read (I'm pretty sure War and Peace is longer), but it's got to be pretty close to the top of the list. My edition was 821 pages of text, not including the introduction, end notes, etc. I actually found a article which claims it's 358,000 words -- Dickens' longest work. Normally, I have nothing against long books, but lately I find that some of them make me impatient. Dickens, Dreiser, Tolstoy -- sometimes I think they really could have used a good editor. Even my beloved Jane Austen has moments in Emma (my other current read) in which I feel like shouting, "Just get on with it! Move it along!" It could be my education in journalism, in which we were taught that less is generally more. "Never use a ten-dollar word when a two-dollar word will do!" was the mantra that I have never forgotten. That's why Hemingway (a journalist) wrote. With. Very. Short. Sentences.

But back to David Copperfield. This is one of those classics that frequently shows up on lists of The Best Novels of All Time, Top Reading for College, etc., and in fact is the one Dickens loved best of all his works, probably because it's his most autobiographical. There is some great stuff in this book, and I absolutely started out loving it -- I read the first 300 pages or so very quickly and fell in love with it. I was sure it was going to supplant Bleak House as my favorite Dickens work. The story of David's childhood is both tragic and hilarious. His aunt Betsey Trotwood is an absolute hoot, and I was so impressed that his tragic beginnings were so compelling -- repugnant, but I couldn't put it down. His father died before he was born, his mother remarries an abusive monster, then she dies leaving him with a wretched stepfather who forces him to work in a factory. Of course, he's the quintessential Dickensian orphan.

However, I really got bored in the middle and kept putting it down for other books. David's youth and his courtship of the angelic Dora just didn't do it for me. Generally, I'm not impressed with Dickens' young female characters, which seem to be idealized and flat. It's the great descriptions of scenes and the quirky minor characters that really make the stories come to life. Also, the plot in David Copperfield isn't really that gripping, like in Oliver Twist or Bleak House.

I do realize that Dickens' books were all serialized and he had contracted with his publishers to come up with so many words per week or month; hence, the length and all the padding. I really wish I'd kept a running list of the characters, since minor characters disappear for hundreds of pages and then suddenly reappear. I found myself wondering where in the heck I'd heard of them, and consulting online sources so I could remember how they fit into the story. And of course Dickens is notorious for his use of unbelievable coincidences, which seem to appear mostly at the end of the book, thereby tying up all the loose ends of the story.

Don't get me wrong, I really like Dickens -- I've been on a Dickens kick the last year or so and I've read eight of his works since last May. But I think I may have overdone it this time. I'm glad I read it, and I do recommend it if you like the Victorian style of flowery prose, multiple short chapters, and amazing coincidences. However, I think it's time for me and Dickens to take a short break.
Posted by Karen K. at 5:16 PM