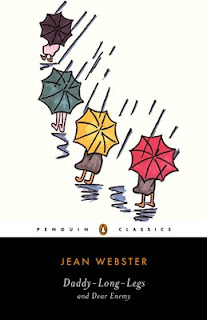 Somehow I managed to grow up an avid reader yet never read some of the classic coming-of-age tales such as A Tree Grows in Brooklyn and Anne of Green Gables. This has fueled one of my current reading obsessions, the children's classics. Of course it's possible I appreciate them more as an adult. I recently discovered a new favorite that I just loved, Daddy Long Legs by Jean Webster. Well, I'm calling it a children's classic simply because it seems to be marketed towards children. More on that later.

A quick synopsis: Set in the early 20th century, young Jerusha (Judy) Abbott has grown up in a not-quite-Dickensian orphanage (another orphan -- children's literature is rife with them!) and at 17, they're ready to put her out on the street. Luckily, some of her schoolwork has attracted the attention of one of the wealthy trustees, so she now has an anonymous benefactor who offers to finance her college education. The only condition is that she write a monthly letter to the mysterious, nameless trustee, whom she dubs "Daddy Long Legs" after she sees a glimpse of his shadow. Judy chronicles her college years through these letters to her patron. We learn about her life, her friends, and of course, the identity of the mystery man before the resolution. Also includes cute little cartoony illustrations by the author.

This is a charming coming-of-age story. It's witty and sweet and not the least bit saccharine or sentimental. All I could think while I was reading this book, which I tore through on a plane ride, was "Why isn't this book better known and/or more popular?" It was very popular when it was first published (in 1912) and had multiple stage and screen adaptations, including one starring Leslie Caron and Fred Astaire, both of whom sound terribly miscast. I can only surmise that it's not really a children's book, and today's adults may find it lacking in sex and violence. Probably teenagers as well, since it lacks the requisite vampire/supernatural element.

Since I enjoyed it so much, I rushed to the bookstore to see if I could find my own copy. The Penguin classics edition also includes the sequel, Dear Enemy. . Amazingly, I must have purchased the only copy in the entire metro area. (Seriously. I checked both mega-book store chains' websites. Not a single copy left in the whole city!).

Anyhoo, Dear Enemy is the sequel, or maybe the companion volume, since it's actually the story of Judy's roommate Sallie McBride, who takes over as director of the dreary John Grier Home. Again, the story is told in letters, mostly to Judy, her politician swain in D.C., and to the grumpy resident physician, Dr. MacRae (the eponymous enemy). Again, it's delightfully breezy yet intelligent, but with a more serious undertone, since Sallie is dealing with social reform, orphan welfare, nature vs. nurture, etc. Plus, Sallie is a grownup, struggling with her own romantic feelings. This book deals with far more adult themes than Daddy Long Legs, and I can't imagine this as a good read for a child. I really don't know any teenagers but from what I observe in the library and the bookstore they're mostly obsessed with the supernatural. My library doesn't have a copy, so I don't know how it's typically cataloged. Either way, they are both very enjoyable reads.
Posted by Karen K. at 8:44 PM