This is Where I Leave You by Jonathan Tropper 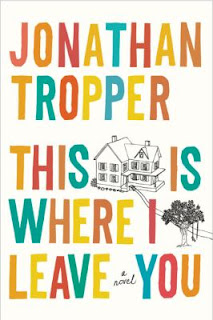 Wow, I really needed this book.

This book has been sitting on my to-read pile for a couple of weeks, and I came thisclose to returning it to the library unread -- it had been on my hold queue for so long, I'd forgotten why I put it on reserve.  Last night, on a whim, I picked it up, and I honestly can't remember the last time I laughed so hard reading a book.  More than a year, I'm sure.  I laughed so hard my kids were staring at me, my husband was staring at me, and I'm pretty sure the dog was staring too.  If I'd been on an airplane I would have been completely embarassed.

Unfortunately, I can't go too much into this book without spoiling it, and that would be so wrong of me.  I'm terrible at repeating jokes, I ruin them without fail.  But I'll give a basic synopsis:  Judd Foxman, his siblings, in-laws, and mother are sitting shiva for his late father, per his dying request (which is ironic because Dad basically didn't believe in God anymore).  Nevertheless, this dysfunctional family is back together for the first week in ages, and it shows.  They really, truly, put the fun in dysfunctional.

Let's face it, every family has problems.  But the Foxman family, besides the patriarch's slow, painful death from stomach cancer, is dealing with divorce, infidelity, infertility, drug problems, a struggling business. . . stuff that sounds extremely realistic and depressing.  Oh, and did I mention Judd and his wife have been separated since he caught her in an, um, extremely compromising position. . . with his boss?  Plus, the soon-to-be-ex drops a major bombshell on him just before he leaves for the funeral.  Yeah, his life sucks.

Somehow, Tropper manages to intertwine all the family horrors and tragedies with moments of outright hilarity.  Mom is the bestselling author of a beloved parenting manual, which includes the most embarassing anecdotes ever about all four children; Wendy, the oldest, is struggling with three small children and an egotistical fund-manager husband who won't get off the phone; the ne'er-do-well youngest brother Phillip shows up with his life coach/fiancee; middle brother Paul is still bitter about taking over the family business after his sports career was destroyed. . . not to mention colorful neighbors, a rabbi with an R-rated nickname, and various friends and relatives who straggle in to pay their respects to the deceased.  Yet, none of the hilarity descends into farce, and the family's serious problems are dealt with honesty that's never maudlin.

A warning:  this book is not for those who are easily offended.  It's pretty explicit, especially regarding  Judd's love life and raging libido, plus some drug references and scatalogical humor.  But if this doesn't bother you, it will definitely put your family's problems into perspective -- a great choice for the holidays when most people are stressing and a lot of people are downright depressed.

According to the book's jacket, This is Where I Leave You is already being adapted into a movie, which doesn't surprise me in the least. As I read this book, it reminded me of two movies: Death at a Funeral, the 2007 black comedy; and A Christmas Tale, a French film starring Catherine Deneuve which has been in my DVD player for about five days -- it's 2 1/2 hours and there's only so much Gallic dysfunction I can take in one sitting. However, isn't nearly as silly as the first and is a whole lot more enjoyable than the second.  I'd recommend reading this book before the Hollywood producers get their hands on it and ruin it.
Posted by Karen K. at 8:26 AM