Mr. Harrison's Confessions and My Lady Ludlow by Elizabeth Gaskell 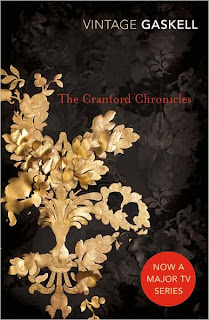 Though I feel slightly guilty, while reading and reviewing these two novellas, I can't help but refer to Cranford, the excellent BBC miniseries which aired in the U.S. in 2008. Like many of us here on the Classics Circuit, I fell in love with the charming and quirky residents of this English village and was eager to read the book. As many of us are aware, the series incorporates not only the novella of the title, but other stories as well:  Mr. Harrison's Confessions and  My Lady Ludlow.
The Cranford Chronicles includes all three of the novellas that were the basis for the miniseries.  I had the pleasure of listening to the audio version of Cranford this summer, so I was eager to read the rest of the stories as well.
If you read Cranford, you won't find the hapless doctor who's the center of the village love triangle. (Or quadrangle. . . I can't keep track of how many women fall in love with him. Anyway, it's very humororus.) Nevertheless, if you want to read about poor Mr. Harrison, this is the edition you want.  Essentially, Mr. Harrison is chatting with a visitor, Charles, and reminiscing about his arrival, his early career, and his romantic misadventures. In this case, the town is actually called Duncombe, but it shows strong parallels to Cranford. His medical colleague, Mr. Morgan, points out soon after he arrives:

"You will find it a curious statistical fact, but five-sixths of our householders above a certain rank in Duncombe are women. We have widows and old maids in abundance. In fact, my dear sir, I believe you and I are almost the only gentlemen in the place. . ." which sounds an awful lot like Cranford.  Of course, being one of the only eligible males makes the hapless Mr. Harrison the target of a lot of scheming and speculation. Though he's an excellent doctor, Mr. Harrison makes quite a few social missteps that are nearly his undoing. (Of course it all works out in the end.) Fans of the miniseries will find a few surprises, but it's very close to the the TV production, and in a good way. It's a quick, charming read (only 89 pages), but as with Cranford, not much really happens, just charming sketches of provincial life that will make you laugh and cry. 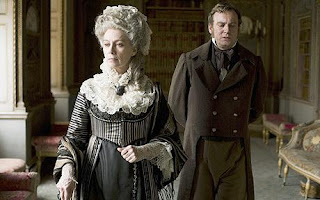 The final novella of The Cranford Chronicles is My Lady Ludlow, the longest of the three at nearly 200 pages. Sadly, it was my least favorite. It begins with an interesting setup: Margaret Dawson, a young lady of about 17, is one of nine children living with her widowed, impoverished mother when they receive a letter from a distant relative, the rich noblewoman Lady Ludlow.  he has heard of the situation and offers to have Margaret come and live with her as a sort of lady-in-waiting.  Lady Ludlow is the benefactress of several other young ladies in similar situations.Through Margaret's eyes, we get a look into the life of this aristocrat, who seems to be holding on to a former way of life, resisting changes.
Lady Ludlow, though kindhearted and well-intentioned, is snobbish and elitist. The idea that lower classes should receive any education is absolutely abhorrent to her. Though she petitions to have a poacher released from jail since his wife and children would starve, she completely rejects the suggestion of her estate manager that said poacher's whipsmart son be given any sort of education that could help him later in life --  i.e., pull himself by his bootstraps and not have to steal to survive. Nope, he needs to learn his station and stay there!! Hang around a cow pasture until you die, because that is your lot in life, and you need to accept it. Reminds me an awful lot of how American slave owners kept the slaves in check by keeping them illiterate.

Lady Ludlow uses this opportunity to tell a long, detailed, drawn-out story about French aristocratic friends and how they suffered tragically during the French revolution because those upstart revolutionaries were such meanies and killed off all the poor, misunderstood aristocrats. Apparently the English aristocrats were terrified the same things would happen to them. This part was really difficult for me to read, since as a librarian, it's the antithesis of everything I believe in. Knowledge is power.

Besides, this section went on waaaay too long, about 70 pages, and I always find it irritating that characters in books can recall entire conversations and minute details of events years later, when they heard about it second or thirdhand. Riiight. I'm not sorry to admit I skimmed more and more of this section and finally skipped ahead until the poor aristocrats lost their heads. There's a reason this episode was left out of the TV series.

I very nearly gave up during this section, but finally, Lady Ludlow offers a solution to this freethinking estate manager:  the well-born but poor spinster Miss Galindo will help you with the accounts! This is pretty radical for her, since women have no business doing men's jobs, bu the story picks up again.  After Miss Galindo agrees to take the job, Gaskell includes a great little zinger aimed at her fellow writers. I just love this quote. Miss Galindo is explaining to Lady Ludlow that she once aspired to write a novel:

"Well! I got paper and half-a-hundred pens, a bottle of ink, all ready --" [says Miss Galindo]

"O, it ended in my having nothing to say, when I sat down to write. But sometimes, when I get hold of a book, I wonder why I let such a poor reason stop me. It does not others."

That just made the entire novella worthwhile. It's equally as witty as something Jane Austen would have written. The story really improved after this, and I'm really glad I finished it.  Gaskell combines a great story with some social commentary. The characters are so well drawn, and she does a great job of tying everything together in a delightfully satisfying ending. It's well worth reading.
Posted by Karen K. at 9:24 PM