A House to Let by Charles Dickens and Wilkie Collins 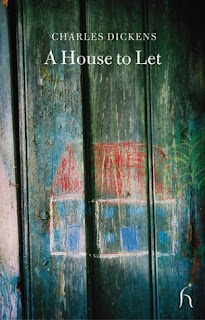 It seemed serendiptious when Wilkie Collins was chosen for the very first Classics Circuit, as it just so happened that the Classics Book Group to which I belong  had selected The Woman in White for its November discussion.  (This would be the Real People book group, which makes it much harder for me to wiggle out of reading the book in a timely fashion.)  "Aha!" I thought.  Cleverly, I planned to kill two birds with one stone, and I eagerly signed up on the Classics Circuit to review TWiW.

Foolishly, it did not occur to me that quite a few other people decided to take this opportunity to read and review what is most likely Wilkie Collins' most popular work. What did occur to me, however, that I would most likely be unable to come up with something clever and pithy and insighful that had not been said already.  Oh dear.

But as luck would have it, my generous lending library -- how I love you, SAPL -- is chock-full of other works by Mr. Collins.  Twenty-three of them, to be exact.  However, since most of them are unfortunately available only as downloadable e-books, and as I had just completed the 600+ pages of The Woman in White (you can read my pithy and insightful review here.) I was most intrigued by A House to Let, which lists joint authorship by Mr. Collins and two of my favorite Victorian authors -- Charles Dickens, Elizabeth Gaskell -- plus a writer called Adelaide Anne Proctor. I was intrigued -- how interesting to compare some of my favorites on a collaborative novel.  Well, novella, to be exact, since it's a mere 94 pages.  According to The Victorian Web, A House to Let was originally published as a 1958 Christmas edition of the magazine Household Words.

A House To Let is comprised of six chapters: an introductory chapter credited to both Collins and Dickens; then a chapter by each author individually; and a closing chapter, again written by Collins and Dickens (of course, as the editor, Charles Dickens gets top billing).

Our story begins in the first chapter, "Over the Way," jointly written by Dickens and Collins. An elderly lady named Sophonisba, upon the advice of her physician, rents a house in London for several months.  Her manservant, Trottle, finds the perfect place.  The only drawback is that it is directly opposite a mysterious house, which has stood vacant for many years.  Sophonisba is not put off by this, but soon after moving in, she believes that a mysterious eye is watching her from the vacant house.  She is determined to learn its history, and both Trottle and Sophinisba's old friend and admirer, Jabez Jarber, get to work to trace the previous owners and tenants.

Each subsequent chapter, written by a different author, traces another owner or tenant in the history of the mysterious house.  This was an interesting (and quick) way to compare the styles of the different authors, each of which show some of their personal, typical styles.  The first chapter was fairly light, witty, and easy to read, and I definitely recognized Collins' direct, easy-to-read style. The second chapter, "The Manchester Marriage" is classic Gaskell, a beautifully written, somewhat tragic domestic tale of a couple from Manchester who move into the house.  It is the second marriage for the wife, who was widowed when her first husband was lost at sea.

However, the third and fourth chapters were nearly my undoing.  I didn't care much for the third story, "Going Into Society," which was the Dickens contribution, about a carnival man and his friend, a dwarf who is desperate to join high society.  One of Dickens' greatest strenghts is his fascinating, quirky, supporting characters.  They're wonderfully colorful when sprinkled throughout his novels, but ten pages straight was a bit much for my taste.  It's written in dialect, which I found difficult to wade through, and besides, I've always found carnival and circus characters a little unnerving.  The fourth chapter was also tough, as it's written as a long narrative poem by Adelaide Anne Procter.  I know next to nothing about poetry, so this was pretty challenging, though it's only ten pages long.

I was glad I stuck with it though -- the Wilkie Collins story, "Trottle's Report," is a standout.  It's spooky and gothic, with creepy, mysterious characters, just as I expected from Collins.  And the final chapter "Let at Last," wraps up the mystery and provides the reader with a happy ending.  Without giving anything away, I'll just say it's exactly what I would have expected from Dickens, very reminiscent of Oliver Twist or Little Dorrit.

This book is a nice introduction to some Victorian writers.  Although the stories are all meant to go together, I could have easily skipped the chapters by Dickens and Procter, which I didn't much care for anyway.  Still, it's a quick respite after some of the lenghty works by these authors.  If you want to try Dickens, Collins, or Gaskell, but you don't have time or energy to attack a 600 page tome, this is a fine place to start.
Posted by Karen K. at 10:21 AM