Black and White and Dead All Over by John Darnton 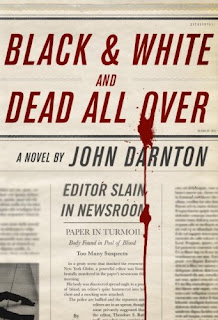 This was another book group selection.  Normally I wait until closer to the meeting so I won't forget anything, but we're low on copies so I decided to start it right away so I can return it for someone else on the wait list.  Plus, I was looking for another excuse to put off reading Jude the Obscure, the selection for one of my online groups, which I have been dreading.  I did vote for it, months ago, but now that it's time to actually make the committment to reading it, I'm worried.  But that's fodder for another blog.

I haven't been reading that many crime books or thrillers since I've been on my Literary Fiction/Classics obsession, but I was vaguely interested in this since Once Upon A Time I had aspirations of a career in journalism.  I even went so far as to select it as my college major, which included an internship at a small paper in a small city in Michigan -- though nothing nearly as complex or fascinating as The New York Globe in this novel [a thinly veiled version of the New York Times] but we did actually have presses and editors and deadlines and whatnot, though this was in the days before the Interwebs.

The premise of this is book is intriguing -- a much-disliked editor is killed in the newsroom, with an enormous cast of supporting characters with various motives, which provides the author with endless opportunities to create cliched characters and thinly veiled counterparts to the actual NYT times employees.  However, I think he was so busy making up clever names for them, and satirizing the decline of print journalism, he forgot how to write a coherent mystery. There are way too many supporting characters, most of them poorly developed, and they popped in and out of the story so fast I couldn't keep track of most of them. Some of them are so briefly introduced with so little explanation, that when they finally reappear at the end of the book that I had no idea who they were. I felt as if I should have taken notes -- and the book's not that long, only 350 pages!  It's not like a Charles Dickens novel -- Bleak House [one of my personal favorites] -- is almost 1000 pages long and was published serially over 18 months, and includes about 40 principal characters.  In that case, I feel that notes are justified.  Not so much with this book.


And the thing that bothered me the most is how sexist the characters were -- all the female reporters are sluts or bitches, or both, and apparently they can't possibly write anything but fluff pieces or get promoted unless they've slept their way to the top or both.  In the non-reporter female roles, the murder victim's assistant is a dried up old spinster, the protagonist's estranged girlfriend is a shrew. . . the only remotely likeable female character was the detective assigned to the case, because she's the love interest for our intrepid reporter Jude --who, naturally, solves the case. Because, obviously, women should just aren't smart enough to do that, and should stick to their assigned roles as the love interest. Annoying.

I'm not even going to attempt to describe the plot, but I will mention that there are various subplots which I suppose are satirizing/exposing the difficulty of putting out a newspaper, the good old days of journalism, plaigairism, the dumbing down of the media, tabloid journalism, corporate takeovers. . . shall I go on? I didn't think so. If you like convoluted mysteries, I won't spoil it for you, and if you don't, don't bother. On Goodreads, I gave it 1 1/2 stars.  At the time I was reading it, I didn't hate, but now I really wish I had those hours back.  Maybe Jude the Obscure would have been the better choice after all.
Posted by Karen K. at 3:16 PM