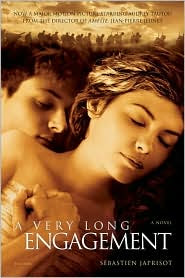 This book has been on my to-read list since I watched the DVD several years ago.  Lately, I've been trying really hard to be strong and only read books that are A) on my bookshelves, unread or B) for a book group. However, I was volunteering at the library last week, and I could not help myself, the book went into my book bag and I finally gave it the attention it deserves.

In a way, I really dislike seeing the movie adaptation of a novel first, because then I have a preconcieved notion of the characters, locations, etc.; however, I only very dimly remembered hearing about this book before I watched the movie, which is wonderful. It's actually tough to say which is better, since I watched it about four years ago, but it really stuck in my mind and I've been wanting to read the book ever since. But is it literary snobbery to only read books, and pooh-pooh film adaptations, especially if they're wonderful?  Discuss!

Anyway, back to the novel:  This is a historical fiction/mystery novel about a young Frenchwoman, Matilde, who is searching for answers about her fiance's death during WWI.  In 1919, two years after Matilde's fiance, Manech, supposedly died at the front, Matilde receives a letter from a dying soldier, who has information about the day Manech died.  Matilde, who's been unable to walk since she was three, visits the soldier, Esperanza, at the hospital, where he confesses that Manech, along with four other soldiers, didn't die in the line of duty -- they were court-martialed and convicted for self-inflicted injuries.  Instead of execution, the five convicts were sent to the front and pushed into the no-man's land between the trenches, where they died in the crossfire. Esperanza was the soldier who wrote out and mailed five farewell letters the condemned men sent to their loved ones.

Esperanza gives Matilde copies of all the original letters, but she isn't satisfied, and begins digging deeper into the story.  She becomes convinced that Manech, and perhaps others, somehow survived.  She begins to investigate the mystery, writing letters to the families of the men and placing ads in newspapers.  Her family is wealthy and she uses their considerable resources to aid in her quest.

I found this to be a really intriguing mystery, as well as a romantic story.  Matilde is dogged in pursuit of the truth.  Much of the story is told in letters and interviews she has with other soldiers who witnessed the event and the lost soldiers' families and friends, so there are a lot of different viewpoints and opinions by different characters.  This approach really reminded me of how many different truths can exist, even if it's all the same event, especially amid the confusion and horror of war, and how narrators in books can sometimes be unreliable.

The only difficulty I had with this book was that I did find it a little difficult keeping some of the characters straight -- besides the five soldiers, who have their given names, plus the nicknames given by their comrades, plus the other soldiers who were witnesses, plus family members. . . and they're all French, of course.  After a few chapters I began to wish that I had made a running list of all the characters and taken notes as I went along.  However, I can't say that I blame the author, it's probably my fault for not paying better attention at the beginning.

I loved this book, and I was just as drawn in by the characters and the mystery while reading it as I did when I watched the movie. I really felt like I was right there, experiencing everything in France right along with Matilde and the soldiers.  I'm only sorry I took so long to finally read it, and I'm going to watch the movie again as soon as I go pick it up from the library.  After I watch it I'll report back and see if the movie holds up as well to the book.
Posted by Karen K. at 4:26 PM