The Woman in White by Wilkie Collins

Before I started reading classics, the idea of Victorian novels made we want to run screaming from the room -- I always thought they were long and boring and full of sentences that never end.  Well, I'd be lying if I said there weren't any Victorian novels like that, but The Woman in White is definitely NOT one of them. 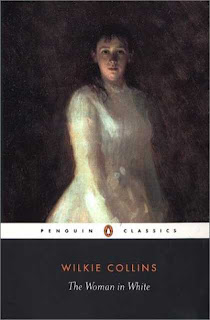 For a 600+ page book, this is a quick read.  I brought it with on my trip to Philadelphia, and found myself reading it every night with a flashlight (so as not to disturb my traveling companion).  It's a real page turner, and some nights I was up pretty late since I had to find out what happened next.  Between the late nights and the plane ride, I zipped through 300 pages of this book in less than a week -- pretty good considering I had other books and was busy with lots of convention activities.

A quick summary of the setup, without spoilers:  the hero, Walter Hartright, has been hired for several months as an art instructor for two sisters at a wealthy English estate in the country.  The night before he's scheduled to depart, he's out for a midnight walk, and encounters a mysterious woman in white who is desperate to escape someone or something, she won't say what.  He helps her find a carriage and then she mysteriously disappears, leaving him naturally curious.  After he arrives in Cumberland for his new post, he discovers that this mysterious woman is somehow connected to the beautiful Laura Fairlie, one of the two sisters, with whom he falls madly in love.  The story becomes a page turning thriller, with mystery, deceit, crime, and some excellent plot twists.  I don't want to say too much for fear of spoiling the story.  And if you decide to read this book, please, don't read the explanatory end notes, which include spoilers -- so irritating!  It's hard enough to avoid spoilers nowadays without having them included in the book itself!!

Anyway, one of the most interesting aspects of this book is the use of multiple narrators.  I don't know if Collins was the first novelist to use this technique, but he does it really well.  What I found particularly interesting is that the range of narrators includes not only the hero but minor characters like the housekeeper, and villainous characters as well, so you get everyone's side of the story.  It also made me wonder how reliable some of the narrators are.  Collins also uses this technique in another of his most famous works, The Moonstone, which I read several years ago for an online classics group.  At the time I liked it, but it didn't really make much of an impact, unlike The Woman in White, which I consider to be the superior book.

My only complaint about this book is that the love interest, Laura, is so underdeveloped -- a problem which I also have with Dickens.   The reader has absolutely no information about Laura and why Mr. Hartright (another punny name, much like those used by Dickens and Trollope) is so in love with her, except she's beautiful.  Was that all that was necessary for Victorian male authors?  In almost every Dickens work I've read, the female love interest is beautiful and boring, almost vapid.  By far the most interesting character in The Woman in White  is Laura's half sister Marian, who is quickly described as mannish and unattractive, if not downright ugly.  But she's smart, loyal, and resourceful, and she's one of the first private detectives in literature, if not the first female detective.  So is Collins implying that smart women are ugly?  That bothered me.  Maybe intelligence was considered an inherently masculine trait and therefore Marian couldn't possibly both be smart AND attractive.

The Woman in White is the selection for my library's classic book group this month (a face to face group! with real live people!).  Originally I was going to wait and publish this review as part of The Classics Circuit, but my review is supposed to appear in early December, and frankly, I just couldn't wait that long and I really want to read more Collins.  I was pleased to discover my public library has quite a few of his works available, including some that I'd never heard of (like The Evil Genius -- sounds intriguing!  So theres Collins aplenty coming up soon. New postings start tomorrow.