There Will Never Be Another You by Carolyn See 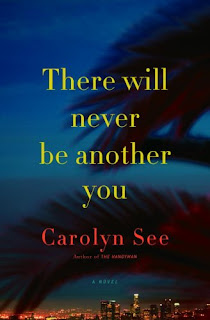 This is an odd book.  Interesting, well-written, but odd.  I'm having a hard time figuring out how to describe it, much less review it.  Quite frankly, I don't think I would have ever chosen this book on my own, but it was the selection for my Real People book group.  (Where we meet and discuss -- face-to-face!!  Like in the olden days.)  But here goes: The book starts out with Edith, (first person narrator) a sixty-four year old woman, who is dealing with the immediate loss of her terminally ill husband, who had apparently died in their Los Angeles home the night before.  She wakes up early and starts cleaning the house of all the parephernalia of his illness, shocked and grieving, wondering what's to become of her.  Sounds like the beginning of a heartfelt domestic-type novel, right?  Wrong.  Meanwhile, the phone is ringing off the hook.  In her grief, she could care less about talking to anyone.  When she finally answers, it is her son telling her to turn on the television.  It is the morning of September 11, 2001.

So then, I thought, okay, this is a book about how terrorism is changing our daily lives, with Edith as the main character.  Wrong again.  The action then cuts to Edith's son Philip (third person narrator), an unhappy dermatologist working at UCLA medical center.  He's kind of just coasting through life, not wanting anything too challenging either professionally or personally -- he chose dermatology because it was less messy and difficult than other specialties, and he puts up with his spoiled wife's whining because her brother's a divorce lawyer and he's not smart enough to hide his assets and ditch her.  (Seriously. It says so, page 52, second paragraph.)  Plus, they have two kids, a teenage girl who has nothing but contempt for her dad, and a ten-year-old son who is so seriously messed up, no private school wants him and he'll be forced to go to a public school.  Wow.  Phil's life sucks.

Phil's not all bad though -- he really loved his stepfather (i.e., Edith's most recent husband) and did his best to help out through his terminal illness.  So there is a glimmer of hope for Phil.  But now, the book starts to feel like a literary domestic novel.  But wait!  There are hints and undertones of some serious medical problems on the horizon -- mysterious dead cats, intrigue at the lab, and a colleague who suddenly goes on a permanent vacation.  Is this book actually about some kind of bioterrorism or undiscovered plaugue.  I thought, okay, this book is now a medical horror/mystery/drama, i.e., Michael Crichton-esque or about some kind of nasty disease like Ebola as a metaphor for life.  Or maybe some kind of dystopia like a Margaret Atwood novel.  However, this book is only 256 pages, not a lot of time left to set up a whole alternative future.

Well, that wasn't it either.  Without giving away the rest of the book, I will say it did not turn out at all as I expected.  In retrospect, some events are cleverly foreshadowed, but there are some extraneous events and several loose ends that never seemed to resolve.  It's not a bad book, to say the least.   It's a pretty easy read, the writing is good, and Carolyn See does an excellent job at creating characters and scenes without a lot of silly fluffy descriptive writing.  As a contrast, I recently attempted to read the latest Dan Brown novel, The Lost Symbol.    I put it down in a snit after 80 pages, I just could not put up with the ridiculousness and bad writing. Dan Brown's idea of creating a character pretty much consists of describing their clothes and dropping in a lot of brand-names, which to me is a sign that the writer couldn't think of anything else.  Not so with Carolyn See.  She doesn't tell you so much as show you, without a lot of extra garbage.

And somehow, I actually sympathized with poor Dr. Phil.  He's not a very interesting character, but Carolyn See made me care enough about him, and his mother, to find out what would happen, which I find admirable.  It's tough to make readers want to finish a book about annoying characters that they basically dislike.

As I mentioned earlier, I read this book because it was the monthly selection of my book group, which met yesterday.  Nobody loved it, a few people (including the coordinator) really hated it, but if nothing else, we had a great discussion about it.  And we had seventeen people show up, which is the biggest book group I've ever attended.  This group is held at  the public library, so it's open to anyone, but never know how many people will show up.  And there weren't even enough copies for everyone.  So, hats off to our book group and our coordinator Wendy for her choice.   I may not have loved this book, but I certainly don't regret reading it.