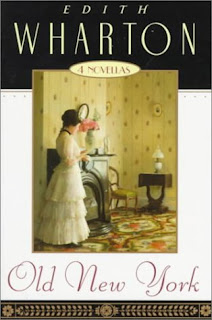 Write what you know.  Okay, it's a cliche, but Edith Wharton honestly did, and once again, I can see fragments of her personal life in her collection of novellas, Old New York. (Most of you know a bit about Wharton's background; if not, click here.) For such a prolific writer -- more than 20 novels, plus novellas, nonfiction, and more than 80 short stories --  Wharton manages to include elements of her own history in nearly every one of her works.   Frequently, it's the high-society setting around the turn of the century, but even in a book like Ethan Frome, with a setting in rural Massachusetts, her themes reflect her own life story. I keep seeing three themes, over and over:
1. People trapped by their own circumstances, with no forseeable escape.  They can be rich or poor, male or female, but they're usually females with limited resources. Frequently, they're trapped by their station in the rigid society of the time.

2. Women without choices.  Over and over, Wharton writes about women who are have basically no choice in their future.   They're completely limited by the morals and standards of the day, and by the amount of  education that their station in society allows or doesn't allow; by their need to find husbands to support them; and by their lack of employment opportunities.  Sometimes these women have to use their wits to survive by manipulation.

Frequently I've seen a combination of these elements, sometimes all three.  Old New York is comprised of four novellas in one volume (it's also the original title of her Pulitzer-prize winning novel, The Age of Innocence).  Each of the novellas is set in a different decade in the 19th century: the forties, fifties, sixties, and seventies, though some of them are written in retrospect, or from the view of an outsider, as in Ethan Frome, wherin the tragic tale is told by an unknown narrator.  Two of the protagonists are male, two are female.  The first, False Dawn, is the story of a wealthy young man struggling to assert himself despite his overbearing, domineering father; the second, and best known, is The Old Maid, the story of an adopted child and two women who are her surrogate mothers; The Spark, about a young man whose life is changed by an encounter by a famous writer; and the last, New Year's Day, is a tragic tale about a young woman suspected of adultery.   None of them are particularly long, between about 60 to 120 pages, so it's a good introduction to Wharton.

I really liked this book.  Again, I saw the same themes repeated, but Wharton is able to keep these stories and novels fresh and interesting, despite the repetition.  And even though they're mostly heartbreakingly tragic, I find I can't stop reading them.  The plots and characters from these four novellas were so well written and the developed I could imagine all of them as full-length novels.  I'll admit, sometimes her prose is a bit dense and flowery, and it sometimes seems to take Wharton some time to get to the point, a bit like Henry James, her dear friend, but to a much lesser degree. A couple of times during this reading (especially in The Old Maid, the longest of the novellas) I really just wished she'd get going and make her point, but when she does, it's powerful.

Some people complain that they can't relate to the high society subjects of Wharton's novels.  I've read quite a bit of British literature, and I've always found the social constraints of the rigid class system and aristocracy so foreign.  When I read Wharton, I'm reminded that it does exist in the U.S. as well -- maybe it's a bit more subtle, and it's a heck of a lot less relevant in this day and age,  but I'm sure it still exists in the stately homes of Boston, New York, and Newport.  And I thank my lucky stars that, first of all, I am hopelessly middle-class, (I have no desire to experience a "high society" life -- heck, I never even joined a sorority in college!); and second; that I was born in the second half of the 20th century.  It's still tough for women, but thank God we have choices and opportunities, and the possibility of an education.   Reading Wharton always reminds me how much better it is now than in the Good Old Days.

For more about Wharton, please see the Classics Circuit home page, with links to more insightful reviews of her life and work, all month long.
Posted by Karen K. at 8:00 AM