The Man From Beijing by Henning Mankell 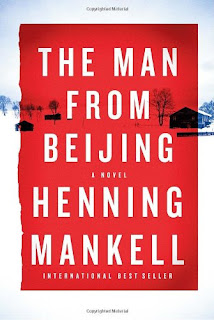 I will not mince words:  this book was a HUGE disappointment.  I was so excited when I finally got this from the library -- I'd been on the hold list forever.  And it was such a huge waste of time, I'm really annoyed.
But I should back up a bit -- is it just me, or are Scandinavian mysteries really hot right now?  I first started reading them a couple of years ago when a well-read library colleague recommended an Icelandic author, Arnaldur Indridason.  Icelandic -- who knew?  Well, turns out there are just a plethora of great mystery authors from Scandanavia, which sort of makes sense, as they have such long, dark, bleak winters.   Not much to do for several months except drink and contemplate horrific crimes, I suppose.   So, anyway, I read several from Indridason, which I loved, and I tried Stieg Larsson, who's very hot now because of The Girl with the Dragon Tattoo (though he is sadly dead and not writing any more); and then I found Henning Mankell, who was recently featured on a PBS Mystery! miniseries, Wallander starring the wonderful Kenneth Branagh. All very exciting.
But this book, not so much.  The title should have been a giveaway that this book would be different -- it does not feature Mankell's Detective Wallander.  No, this is a stand-alone novel, with a new sleuth who is actually an amatuer, a criminal court judge named Birgitta Roslin.  She finds herself involved in a horrific murder after nineteen bodies are discovered in a tiny remote village in the far north.  Though she's miles away in the big city, she realizes she's connected to the victims -- years ago, two of the victims were her mother's foster parents.  Intrigued and frightened, she begins to dig deeper and naturally finds out all kinds of stuff that the professional police miss, like the connection to the mysterious Man from Beijing, and possibly even his identity.
This book had some real potential, but after a few chapters it really went downhill.  After Birgitta discovers the connection (and shares it with the police, who naturally dismiss it as farfetched), there's a great flashback to the source of the Sweden/China connection, which goes back more than 100 years and is thousands of miles from either country.  But sadly, then for hundreds of pages the action jumps to characters in China (not a spoiler, folks, as it is The Man From Beijing) and there's a huge digression about what's going on with communism vs. capitalism in present-day China which goes on forever, and then the action shifts to Africa of all places, and there's a whole pan-global tirade about colonialism and capitalism and I think the book really lost focus.  It's as if Mankell had this great idea about a killer with an overdeveloped sense of vengeance, and while explaining the back story, he had another great idea for a novel about China and Africa, but decided to smash them both into one book.
The protagonist Birgitta, who figures out the connection because of several fantastic coincidences, then turns into an idiot.  This woman, who has been a criminal court judge for years, does some really stupid things like telling complete strangers in various countries information about criminals she's investigating, trusting said strangers, not telling the police she's in danger. . . it goes on. Seriously, criminal court judges work with criminals -- you might learn a little something about the criminal mind!  I knew that just from watching Law & Order!  Plus, the horrific crime itself is barely explained -- there's all these loose ends that are never tied up.  I kept reading and hoping for some kind of explanation but all this stuff is just left out, like Mankell ran out of time.
And now I'm really annoyed that I wasted half a weekend on this book.  I could have been doing something useful.  Like watching Law & Order.
Posted by Karen K. at 11:28 AM