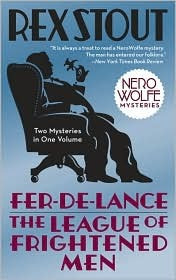 I've been a mystery lover since my mom took me to see Murder on the Orient Express, which is still one of my all-time favorite movies. (This should have scarred me for life, as I was only eight, but oddly enough it didn't.  And I showed it to my girls when they were eight and twelve.  Didn't hurt them any either)  Anyway, this started my love affair with Christie -- I've read everyone one of her mysteries, including the plays and short stories.

For this Classics Circuit, I decided to branch out, and at first I was  disappointed.  Maybe Christie has spoiled me for other authors.  First, on a librarian friend's recommendation, I tried The Three Coffins by John Dickson Carr, supposedly the quintessential locked room mystery, but I was totally bored with it.  I switched to Dorothy Sayers, whom I've never read, and decided to start with her first Lord Peter Wimsey mystery, Whose Body?   Again, I just couldn't get excited about it -- Lord Peter seemed so contrived and unreal.  Neither of these authors was able to get me hooked like Christie.

Finally, I returned to this side of the pond, and picked up Rex Stout's Fer-de-Lance, the first mystery starring the enigmatic Nero Wolfe and his narrator sidekick, Archie Goodwin.  First published in 1935, this classic Depression-era mystery is complete with hardboiled private eyes, roadsters, dames, and snappy dialogue.  It's a bit like a cross between a cozy mystery and a Sam Spade classic detective story -- genius Nero Wolfe never leaves his beautiful apartment, filled with his beloved orchids, so his intrepid helper Archie does all the leg work and provides all the clever asides and quips.

As entertaining as this book was, I will admit it started out a little slowly.   The first third of the book consist of setting the story, but the reader doesn't get that much background about Archie or Nero, and  we don't even meet the primary suspects until more than 100 pages had passed.  Even then, it's not so much a whodunit as a "how did they do it?"  Unlike Agatha Christie or many other authors, there was no great "aha!" moment, in which the clever detective decides which of the many suspects was the culprit.  There are some surprises and an interesting little twist at the end, but it's very unlike many of the British cozies I've read.

I think the great appeal of this book was the character of Archie.  Nero himself doesn't get a lot of exposure -- he's a recluse, an eccentric genius who never leaves the house and has a strict schedule.  Archie and his snappy dialogue, and the 1930s setting are the real appeal of this book, in my humble opinion.   Here's one of my favorite paragraphs from the book:

If I ever kill anybody I'm pretty sure it will be a woman. I've seen a lot of stubborn men, a lot of men who knew something I wanted to know and didn't intend to tell me, and in a quite a few cases I couldn't make him tell no matter what I tried; but in spite of how stubborn they were they always stayed human.  They always gave me a feeling that if only I hit on the right lever I could pry it out of them.  But I've seen women that not only wouldn't turn loose; you knew damn well they wouldn't.  They can get a look on their faces that would drive you crazy, and I think some of them do it on purpose.  The look on a man's face says that he'll die before he'll tell you, and you think you may bust that up; a woman's look says that she would just as soon tell you as not, only she isn't going to.


I can just imagine Humphrey Bogart or someone of that era delivering Archie's lines.  It almost makes me wish I lived back then, just so I could hear if people really talked like that.  Great stuff!

I have found that with mystery series the first one isn't usually the best.  Fer-de-Lance is pretty good, though I didn't find it a real page turner.  I may give Nero Wolfe another try to see if the later books are an improvement.  It was worth exploring though -- if you're looking for a change from classic British detective fiction it's a lot of fun.
Posted by Karen K. at 8:44 AM