Three Men in a Boat (To say nothing of the dog) by Jerome K. Jerome 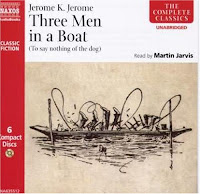 Anyone who says Victorian literature is boring has obviously never read Three Men in a Boat (To say nothing of the dog).  If you haven't, you need to get thee to the library or bookstore, and read it, fast.  Seriously, this is one of the funniest books I have ever read.  This book was written more than 100 years ago, and it still cracks me up, even after multiple readings.

Basically, this is a satire about three pompous, silly young men who take a fortnight's boat trip down the Thames, circa 1889.   I've often compared it to Jeeves and Wooster.   Imagine if Wooster went on a boat trip with two equally clueless friends, but left Jeeves behind.  And brought a fox terrier.  That pretty much sums this book up in a nutshell.

There's not much plot to speak of -- the book is really a collection of vignettes and essays.  The narrator, J (i.e., the author, Jerome K. Jerome) frequently digresses and waxes philosophically about the beauty of the countryside, history, women's fashion, you name it.  In fact, most of the book is just an excuse to weave funny stories together.  We were listening in the car and my daughter (aged 9) finally said to me, "When are they going to get on the boat?  He's really birdwalking, isn't he?"  [I found her use of birdwalking, her third-grade teacher's term for digressing, particularly apt in this instance.]


I nearly always have at least one audio book in the car, even if I'm just running errands around town.  Three Men, my latest audiobook, is perfect for absorbing in little bits and pieces.  I highly recommend the version pictured above, the Naxos Audiobook narrated by Martin Jarvis.  His comic timing is impeccable, and his voice and accent are reminiscent of Hugh Laurie (who played Wooster in the BBC adaptation of Jeeves and Wooster, which fits perfectly).   This book would be an excellent choice for a long car trip, and it's appropriate for listeners of all ages.  My children loved it when they were in elementary school.  I can't think of many Victorian novels that fit that description.
Though the story does have a few slow spots, most of the book is hilarious.  Many of my favorite bits are about food -- shopping for it, packing it, and of course the party's attempts at cooking while camping out.  There's a very funny story about smelly cheeses, and one of my favorite bits in the whole book concerns a tin of pineapple.  It's a bit long, so I've abridged it somewhat:
. . . when George drew out a tin of pineapple from the bottom of the hamper, and rolled it into the middle of the boat, we felt that life was worth living after all.   We are very fond of pineapple, all three of us.  We looked at the picture on the tin; we thought of the juice.  We smiled at one another, and Harris got a spoon ready. 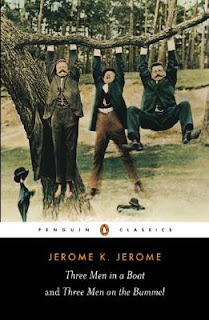 Then we looked for the knife to open the tin with.  We turned out everything in the hamper.  We turned out the bags.  We pulled up the boards at the bottom of the boat.  We took everything out on to the bank and shook it.  there was no tin-opener to be found.
Then Harris tried to open the tin with a pocket-knife, and broke the knife and cut himself badly; and George tried a pair of scissors, and the scissors flew up, and nearly put his eye out.  While they were dressing their wounds, I tried to make a hole in the thing with the spiky end of the hitcher, and the hitcher slipped and jerked me out between the boat and the bank into two feet of muddy water, and the tin rolled over, uninjured, and broke a teacup.
Then we all got mad . . . [this continues as they try to beat the tin into submission].   We beat it out flat; we beat it back square; we battered it into every form known to geometry -- but we could not make a hole in it.  Then George went at it, and knocked it into a shape, so strange, so weird, so unearthly in its wild hideousness, that he got frightened. . . . Then we all three sat round it on the grass and looked at it.
There was one great dent across the top that had the appearance of a mocking grin, and it drove us furious, so that Harris rushed at the thing, and caught it up, and flung it far into the middle of the river, and as it sank we hurled our curses at it, and we got into the boat and rowed away from the spot, and never paused until we reached Maidenhead.

Several editions of the book include the sequel, Three Men on the Bummel, in which the three hapless travelers reunite on a bicycling tour of Germany.   I haven't read it yet but I think it'll be perfect summer reading.