My Family and Other Animals by Gerald Durrell 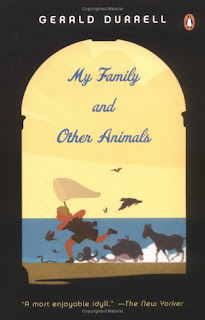 I'm finally back blogging!  After more than two weeks of packing and moving (hellish), I am finally calm enough to post coherent thoughts.   Honestly, moving sucked so much out of me I could hardly read anything more challenging than Agatha Christie (more on that next week when I post for the Classics Circuit).

During the past couple of weeks, I did find an excellent read for stressful times.  My Family and Other Animals by Gerald Durrell is a delightful, light read, perfect for any time you need something humorous that's not too taxing, like traveling or vacation.  This would be an excellent beach read as well.

And it's a true story!  Well, as true as one's childhood memories can be.  When he was ten years old, Gerald Durrell, the celebrated British naturalist and younger brother of novelist Lawrence Durrell, moved with his entire family to a villa on the island of Corfu in the early 1930s.  The book is filled with his reminisces of his eccentric family, quirky locals, including various tutors, and fascinating descriptions of his nature studies which were his lifelong passion.

This book is short (a plus for summer reading), and it's not a novel, so there's not a lot of plot. It's basically just a series of short chapters of funny and interesting things that Durrell remembers from his childhood.  And it is really funny -- I found myself laughing out loud quite a few times.  I don't know if he's merely exaggerating, or if some if these stories are actually true, but either way they're a hoot.  For example, one summer the family realize they've invited far too many friends to come and stay from abroad (to avoid the dreary English climate, which is why the Durrells left in the first place).  Instead of simply rescheduling or cancelling some of their visitors, they settle on the obvious solution -- moving to a larger villa!!  Later, to avoid an unpleasant relative who propose an extended visit, they move to a smaller villa.

And because young Gerry is fascinated by nature, the villa is full of various creatures he brings home, including lizards, tortoises, baby owls, magpies, snakes in the bath, et cetera.  Hilarity ensues.  Quite frankly, it sounds like a fantastic childhood.  What could be better than growing up on a Greek island surrounded by all that nature?  Honestly, sometimes I'd like to get my children away from technology and civilization.  (Though I'd need modern plumbing).

My Family and Other Animals is full of extensive descriptions of nature, including bugs, reptiles, flowers, etc., so if this bores you, you might not enjoy this book.  I found them wonderful -- I know I couldn't write anything as interesting as this:

It was no half-hearted spring, this: the whole island vibrated with it as though a great, ringing chord had been struck.  Everyone and everything heard it and responded.  It was apparent in the gleam of flower petals, the flash of bird wings and the sparkle in the dark, liquid eyes of the peasant girls.  In the water-filled ditches the frogs that looked newly enamelled snored a rapturous chorus in the lush weeds.  In the village coffee shops the wine seemed redder.  Blunt, work-calloused fingers plucked at guitar strings with strange gentleness, and rich voices rose in lilting, haunting song.

This book spawned several sequels, not because Durrell enjoyed writing, but to help finance his zoological endeavors.  It was also adapted into a BBC series in the 1980s and again as a movie in 2005.  My library has a copy and I hope to watch it this week.   I'm also hoping to begin reading The Alexandria Quartet, which was written by Gerry's brother Lawrence Durrell.  Modern Library included it in its 100 Best Novels, and I'm always trying to read those, so I've moved it up on my summer reading list.   Bloggers, have any of you read anything else by the Durrells?  I'd love to hear your opinions.
Posted by Karen K. at 12:12 PM