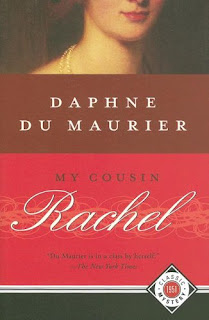 I have owned My Cousin Rachel for almost five years now, and I cannot imagine why I took so long to read it.  Rebecca, du Maurier's masterpiece, is one of my favorite books of all time, and it's the August selection for my classic book group that meets this weekend.  I practically know it by heart, so I grabbed My Cousin Rachel off the shelf this weekend to help get myself in the gothic mood.

I was a little worried that it wouldn't measure up to Rebecca -- honestly, I don't think many books could!  Also, I was really disappointed by Jamaica Inn, one of her more famous novels.  However, I'm pleased to report that My Cousin Rachel was quite a page turner and I couldn't wait to find out how it all turned out.

Here's the setup, in a nutshell:  young Philip Ashley is an orphan, raised by his bachelor cousin Ambrose, who is twenty years his senior.  Philip is the heir apparent to Ambrose's considerable family fortune, and is as close to him as if Ambrose had been his father.  When Philip is in his early twenties, Ambrose is forced by health issues to winter in Italy, where he meets a distant cousin, Rachel.  Though Ambrose had never been much interested in women, he and Rachel hit it off over a mutual love of gardening.  What follows changes the lives of both Ambrose and Philip forever.

Like Rebecca, this book is set on a large estate in Cornwall, and is a blend of mystery and romance.  However, this is actually a historical novel, like Jamaica Inn, though it took me awhile to realize it was set sometime in the early 1800s -- at first I thought it was set in the 20th century, like Rebecca, until Philip mentions his father died in the Napoleonic wars.  There's also no mention of train travel, and communication between Philip and Ambrose takes forever while he's in Italy.

I liked this novel -- the characters were well realized and I thought the pacing and tension were good.  My only quibble was I found Philip to be incredibly naive.  He's in his early twenties, and has led a rather sheltered life for a wealthy young man -- he knows absolutely nothing about women, and doesn't seem to have had any experience with them at all, which I find rather absurd -- he'd been to prep school and spent time at Oxford.  Even if this was almost 200 years ago, I can't imagine that there weren't any women around!  It's not as if he'd been raised on a desert island or locked in a tower, his schoolmates must have had sisters, or cousins -- not to mention all the village women.  When they come into contact with Rachel, both of these two men are so stupidly infatuated with Rachel that I wanted to smack them both.

Nevertheless, the mystery and gothic elements of the book are classic du Maurier.  I don't want to give away too much for fear of spoilers, but even though it's not as good as the brilliant Rebecca -- and honestly, what novel could be? -- but it's well worth reading if you are a du Maurier fan.  I still have The Scapegoat on the TBR shelves -- any other du Mauriers I should read?  Besides Jamaica Inn and Rebecca, I've also read Don't Look Now and many of her other short stories.
Posted by Karen K. at 4:38 PM