North and South by Elizabeth Gaskell 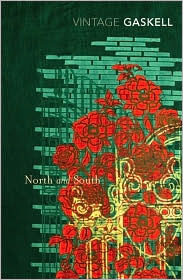 I belong to three face-to-face book groups, and I have to admit that I'm terrible about getting the books read on time -- I usually leave them to the last minute, and it's a rare month in which I finish all three books.  It does not help that two of them meet back-to-back on the same day (in the same library branch) and frequently, the other group meets the same week.  It's crazy, but I love all my groups and I'd hate to give up any of them.

Anyhow, I was really pleased with myself for finishing one of the selections so early -- North and South by Elizabeth Gaskell.  I'd been looking forward to this one all year, and copies were limited, so I was resolved to read it quickly and return it for the next book club member.  However, I couldn't have imagined I'd read it so quickly!  It's more than 500 pages but I zipped through it, could hardly put it down.  Needless to say I really enjoyed this book.  I loved Cranford and Wives and Daughters is one of my all-time favorites, so I had great hopes for it.  I was not disappointed.

Essentially, it's another story of a young woman and man who fall in love after first disliking each other, with verbal sparring and witty repartee.  However, it's much more than that.  This one is set during the Industrial Revolution, with a background of factory strikes, a dirty, gritty Northern town, and the working poor.  Young Margaret Hale was raised in a privileged background, as the companion to her wealthy cousin.  After her cousin marries, she returns to live with her parents in a small, idyllic town in the South of England, where her father is a curate.  Her mother married beneath her to the parson of a small living, where she is miserable.  Mr. Hale has a crisis of faith and leaves his position, taking a job as a tutor to wealthy industrialists in the Northern town of Milton (based on Manchester).  Here Margaret meets John Thornton, a self-made industrialist who owns a cotton mill.  Margaret is at first unimpressed by this man in trade (gasp!) who is one of his father's pupils (he was too busy pulling himself up by his bootstraps for a classical education).  They clash but of course they care for each other.

This has been described over and over as a Victorian re-working of Pride and Prejudice.  Normally, retellings and sequels and prequels of classic lit make me run the other way, but I gave it a chance.  I suppose it's a bit like P&P, but it's pretty loose.  Of course, you have the young unmarried woman and the gruff man who start out hating each other and fall in love -- it's such a trope that it hardly seems like a reworking, but maybe Jane Austen was the first one to use it.  This story has much more social commentary; apparently Dickens lifted this idea for Hard Times, causing a rift between himself and Mrs. Gaskell.  Trust me, this is by far the better novel, as Hard Times is the Dickens novel I like least. 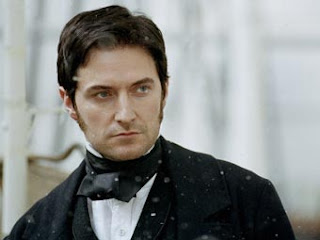 I actually finished this a couple of weeks ago, and over the weekend I watched the BBC miniseries adaptation starring the dreamy Richard Armitage as Mr. Thornton.  It was so good both my daughters watched it with me, and one night we stayed up until almost midnight!  Am I a good mother for exposing them to quality literature or a bad mother for letting them stay up that late?