A Russian Journal by John Steinbeck 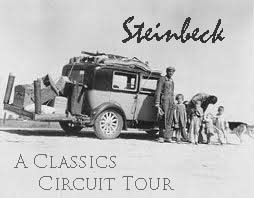 John Steinbeck was one of the authors that got me interested in reading classics a few years ago.  I'd found a list of the Modern Library's Top 100 Novels and was shocked at how few I'd read.  However, I was pretty intimidated by Steinbeck -- The Grapes of Wrath sounded so dire.  Shortly after I made the commitment to classics, I joined an online reading group, and one of the first selections I read with the group was Travels With Charley, in which Steinbeck travels around the U.S. with his dog.  How bad could that be?

Well, it wasn't bad, it was great.  And after that I had the nerve to tackle The Grapes of Wrath, Of Mice and Men, and several of his other works.  I laughed and cried with Steinbeck, and someday, I hope to read his entire oeuvre.  I've read seven of his works so far, and I've liked or loved most of them.

A Russian Journal is a bit like Travels With Charley because it's a non-fiction travel memoir.  At the beginning of the Cold War, Steinbeck and his friend, Robert Capa, a respected WWII photographer, traveled around Russia for several weeks, recording his impressions.  As a famous writer, Steinbeck naturally went to receptions and speeches and events with Important People, but what he really wanted was to travel all over the country and met regular people and see what their lives were like, much like he would do in the 1960s in the United States with his dog Charley.

I found this book extremely interesting -- I've spent my whole life wanting to see other places, so I am a complete sucker for a travel memoir.  Steinbeck is a great observer of life and characters, and most people don't realize how funny he could be.  He didn't make fun of the Russian people -- he held them in the greatest respect.  Steinbeck writes really well about the humor in situations, like the nightmares of bureaucracy and the difficulties of travel. 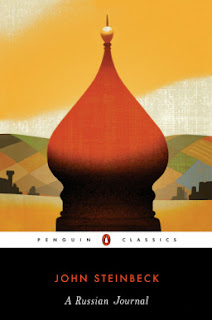 What really struck me about this book was Steinbeck's admiration of the Russian spirit.   Steinbeck sees people who are literally living in holes in the ground, the remainder of their homes after they've been bombed out by the Germans.  It will take years to rebuild, yet the people are undaunted.  They're determined to survive.  One of my favorite parts of the book was when he describes a visit a farming community in the Ukraine, which was particularly hard-hit by the war.  Steinbeck and Capa spend an evening in a village, eating and drinking and dancing with the locals.  There are very few young men, since so many died in the fighting, so the young women dance with each other.  These young ladies work hard all day harvesting in the fields, using traditional methods since there isn't much machinery left since the war; then, they dance all night long, sleep a couple hours, and get up and go back to work in the fields.

Steinbeck found the Russian people as curious about Americans as he was about them.  He also found them to be equally concerned about nuclear war.  And more than anything, he found them warmhearted and generous.  He and Capa are constantly entertained wherever they visit.  One of the places he visited was Georgia, which sounds absolutely wonderful.  After visiting a tea plantation, they stop at many houses to visit, and at each one Steinbeck and Capa are offered food, which they couldn't bring themselves to refuse.   After they were completely stuffed, the manager of a farm asks them to stop by his home for a bite to eat, "only a token bite, as a courtesy."

We were beginning to believe that Russia's secret weapon, towards guests at least, was food. . . . It was the vision of the table that nearly killed us.  It was fourteen feet long, and it was loaded with food, and there were about twenty guests.  I think it was the only meal or dinner we ever attended where fried chicken was an hors d'oeuvre, and where each hors d'oeuvre was half a chicken. . . . [Steinbeck goes on to describe many fabulous-sounding dishes] . . . .The flavors were all new, and we wanted to taste all of them.  Capa, who prides himself on a thirty-two inch waist, and who will not let out his belt, no matter what happens, was getting a puffed look under the chin, and his eyes were slightly popped and bloodshot.  And I felt that if I could just go two or three days without eating anything, I might return to normal.

If you have any hesitation about reading Steinbeck, this is a great introduction.  His writing has a wry humor and genuine insight into the human spirit.

My thanks again to Rebecca at The Classics Circuit!  I've really enjoyed reading all the postings about Steinbeck, and look forward to more tours.
Posted by Karen K. at 6:44 PM