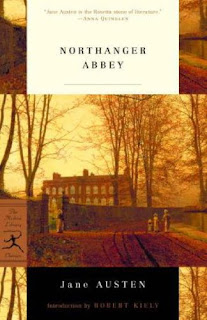 “The person, be it gentleman or lady, who has not pleasure in a good novel, must be intolerably stupid.” -- Henry Tilney in Northanger Abbey.
It's Gothic Literature this month at The Classics Circuit!!  And my author of choice is . . . Jane Austen!!  You would think after spending five whole days discussing Jane Austen with a bunch of other Janeites would be enough, wouldn't you? Well, I did too (and I do admit I'm just the tiniest bit sick of Sense and Sensibility), but after picking up Northanger Abbey, I'm in love with Austen's works all over again.
For those who are not familiar, NA is the story of Catherine Morland, a young lady who is neither particularly accomplished or clever -- she grew up something of a tomboy and has really only become fairly pretty rather recently.  She's from a large family and her father is a clergyman living in the country. Mrs. Allen, the childless wife of the local landowner, has befriended her, and invites her to spend several weeks in Bath, where Mr. Allen will be taking the waters for his health.  There Catherine is introduced to some eligible young bachelors and makes some new friends, including Isabella Thorpe, who is coincidentally the sister of John Thorpe, friend and Oxford classmate of Catherine's older brother James. She also befriends Eleanor Tilney, a lovely young lady who happens to be the sister of the handsome Henry Tilney.  Following all this so far?
While in Bath, Catherine attends balls, strolls around the pump room, and discusses shocking and decadent Gothic novels with her friends.  When she is invited to spend time with Eleanor and her family at their home, Northanger Abbey, she jumps at the chance, since it sounds exactly like the sort of thing she's been reading about in her beloved novels -- and the idea of spending more time with Henry is pretty enticing too.  She envisions secret passages, winding staircases, and things that go bump in the night.  Of course, her imagination begins to run away with her and hilarity ensues.
This is my second read of Northanger Abbey, and quite honestly, I liked it even more this time around.  I read it for the first time several years ago and was unimpressed -- it's one of her earliest works and also one of her shortest, and it's obvious to anyone who's read Austen that her other novels are much more complex and well-developed.   But this time I was really struck by how funny it is!  I saw glimmers of her trademark wit, and it's far more satirical than her other novels.  Pretty impressive for a first book (though it was published posthumously in 1818, it was the first novel she completed, in 1803).  It's not even really that much of a Gothic novel -- our heroine Catherine doesn't even visit the eponymous abbey until the second half of the novel.
Northanger Abbey is not considered one of Jane Austen's best works, and it's not among her most popular.  But having read it the second time, my only real complaint is that it's too short -- I wanted to spend more time with Catherine and her world.
Posted by Karen K. at 8:00 AM